Standing high on Kuju-san I stared at across rugged, boulder strewn, gas billowing terrain.  The land was frosted to a golden brown. The sky, dappled with cloud, a striking autumnal blue.  I picked a stubborn bit of sleep from my eye.  Sleep, blessed sleep, though only a few hours of it, had come.

“Looks like I’ll beat the rains,” I breathed a sigh of relief, scanning the heavens.  Fellow hikers dotted the landscape.  A landscape more reminiscent of the Outback or Arizona, except for the column of volcanic gas seething out of bare mountainside overhead.  Beneath that rising pall I strode over a crest, stony, dry earth crunching beneath my feet and down into a dry, shallow washout that probably only filled after storms or snowmelts.  For a while I followed the dry stream bed and then, after another climb, made my way around the shores of a deep, emerald green pond. Kuju-san itself rose to the right and Naka-dake, the high point of this multi-domed volcanic confluence, lay ahead of me. I scrambled over both.  There was one of those picnic atmospheres to the mountains that day, one that implored me to hold back and take it easy, the tops will take care of themselves in their own time.   Scouts were on the rampage up on Kuju-san and the oldies had claimed Naka-dake and the pond between.  A lone hiker, save for his saddle bag bearing terrier, stopped to greet me.  There was no rest for the mutt and he happily collapsed in our shade and sucked in some much needed oxygen (what little there was left of it in that part of the world after the previous night’s astounding inhalations). 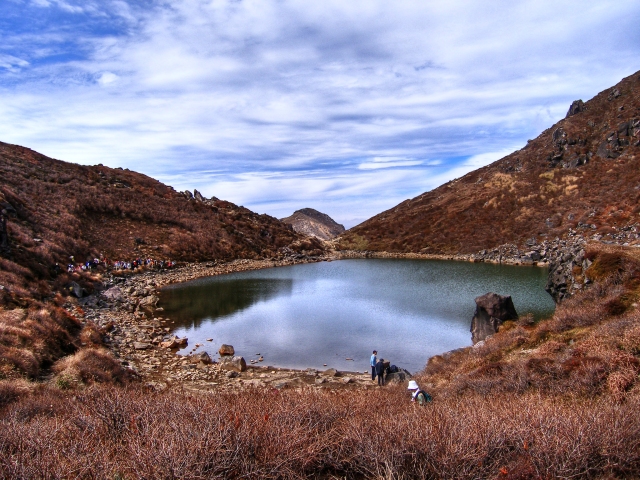 On Naka-dake I put my feet up and watched cloud sweep in and swallow the scenery across the valley. Picnickers in the grass and boulders below me stirred.  All the sunshine that was going to shine that day had shone.  I stole myself for the steep descent and long walk back to the trailhead and bus stop.  Knock kneed at the bottom of Naka-dake I strode away from the mountains across a broad, grass filled valley floor.

As I walked, I reasoned things hadn’t progressed too badly on my first week out of Osaka, newly adjusted schedule and all.  Four mountains down, one of them a half decade long nemesis, not bad. The “One hundred mountains by Christmas” mantra had been replaced by a simple notion to enjoy the remainder of the journey for what it was – a bunch of hikes in the hills.  Hikes that would get done whenever they got done.

Back at the guest house the lassie at reception offered me a single room and I nearly leapt the counter to hug her.  I immediately reserved it for two nights, with the rains on their way I wasn’t planning on going anywhere fast.