Blood oozed from the Yamabushi’s battered feet. My smoke filled test of endurance that morning suddenly paled in comparison. The wild eyed, white haired mountain ascetic, clothed in his white robes, conch shell strapped to his side, chatted with hikers outside the religious precinct at the top of the Ishizuchi-san Ropeway. His single pegged gettas, wooden thong-like footwear, were spattered in blood. Where he’d come from or where he was going with his balancing act, I had no idea but he was chatting to his audience quite calmly, despite the desperate condition of his feet. “Yeah every morning before breakfast I clamber over a dozen miles of broken ground, snap a few toes and peel back a nail here and there, just for the heck of it. Why don’t you try it? It’ll do yous all the power of good,” he was probably saying. I should have taken a photo but at the time I felt it was a little intrusive. 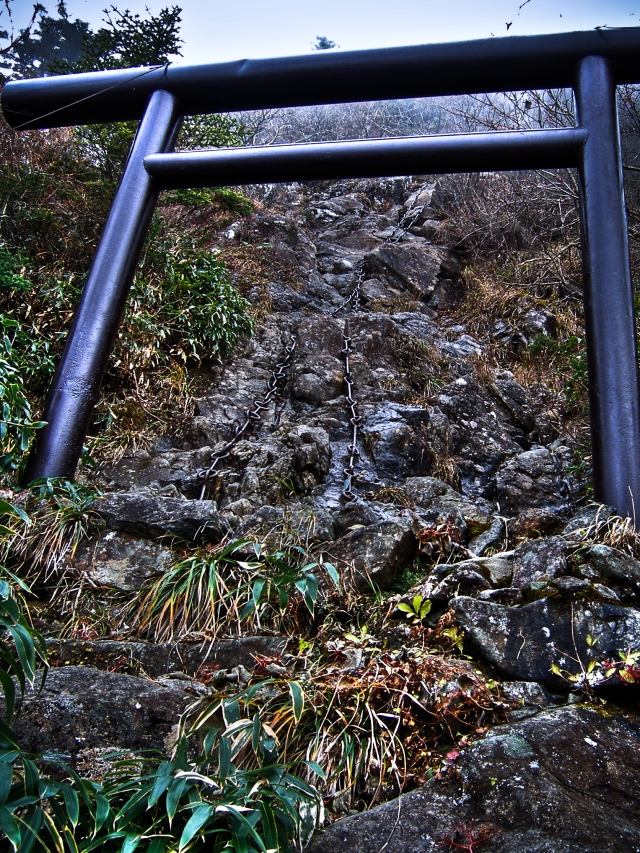 I took to the sun drenched woods, sporting my first bit of unblemished genkiness in weeks and scrambled up the heavy chains draped over the rock walls of Ishizuchi up to the shrine and hut on Misen. There, I took in the view across to the slender summit spine of Ishizuchi-san, one of the Hyakumeizan’s most dramatic scenes. Some hikers scrambled amongst the scatty, stunted timber on the peak’s western flank and I soon left a small but gathering crowd at the hut and joined in their pursuit.  It was a short scramble to the summit where I stood and put the entirety of Western Japan beneath my feet. Shikoku was conquered in a mere two days.