Ill at ease, I propped myself up on bundled bedding.  A rancid, tuna hued belch slunk up my oesophagus and swirled into heavy air, already laced with the hint of burnt fibres.  The vileness of tuna and mayonnaise clung to my tastebuds, four quarter eaten, barely chewed sandwiches of said composition sat uncomfortably in my gut like half drowned rats in a paper bag, threatening to come to at any moment and crawl back out the way they came.  If there’s one thing worse than mayonnaise (other than pumpkin or natto or fish eggs or fish eyes, shrimp flavoured chips, dried seaweed, brussels sprouts, broccoli, seafood pizza, dried squid, dead shrivelled up silver fish that come in bags and give little kids the breath of the devil) it’s tuna.  The canned stuff.  Fresh tuna is passable.  I don’t mind my tuna sushi and sashimi every so often, even though it makes my first swig of beer afterward taste fishy.  But by God, the canned stuff – the bastardised mush that nasty, unthinking people smear over their bread – needs to be banned or at least sold with warning signs.  Who was the fool who first suggested tuna tastes like chicken?  Probably some marketing nut.  ‘Speak some shit and people will eat the shit,’ he probably said to the Tuna movers and shakers at the time.  If I was John West I’d reject the whole bloody lot.  And then, adding mayonnaise to that unholy fishy filth, hell, it’s like wiping wet shit off your arse with grease laden tractor rag or attempting to douse a raging fire in a tyre factory with truckloads of diesel.

Being illiterate and hungry will get you into these predicaments…the tuna one, not the tractor rag or tyre one.

At least I was comfortably ensconced in a tidy little hotel in Taketa town, somewhere deep in the rain soaked, Kyushu inaka for the evening. It could so easily have turned out to be the local lock up, arson the rap, had the fiery red Icebreaker t-shirt I’d noncholantly slung over the lampshade in my room ignited after I stepped out to rustle up an evening feed.  Laundry on the run and all that jazz. Thank heavens for merino wool.  I returned to find the shirt slipped inside the lampshade and smouldering against the hot bulb, ready to burst into flames at any tick of the clock, three neat little black edged, ten yen sized holes singed into it.

‘Bugger,’ I thought.  ‘They cost a bit these things.’  I releagted it to under layer status.   Anyway, more urgent matters came to the fore and I swallowed a beer, then got about scraping my tastebuds raw with my shaggy toothbrush, in an effort to eviscerate the still lingering tuna aftertaste from my tongue.

I awoke to clearing skies and a sunnier disposition.  From the station, a bus took me up to the hamlet of Kobaru outside Taketa and the trailhead of Sobo-san: mountain number seventy.  Unable to get out of first gear, I ambled alongside empty rice fields into a dark wood of plantation timber.  Straight, uniform evergreen trunks rose to a thick, needly canopy that all but blocked out the sun.  Here and there shafts of sunshine shot through to the dark forest floor, illuminating a smoky early morning light.

Crossing a boulder filled stream I crept up Sobo-san, out of the dark woods into a forest choked with head high bamboo.  The woods thinned beyond a flat area at Kunimi Pass and on the push to the summit the path grew steeper and more slippery. Chest high bamboo threatened to swallow the trail.  Crows arced and wheeled overhead. Blackest of blacks against bluest of blues.  From the monument decorated peak I spied Kuju and Aso-san.   A middle aged couple from Osaka vacated the otherwise deserted clearing after my arrival and I cast my eye over the endless lines of mountains stretching away from where I stood.  Further exploration would have to wait for less pressing times and I returned the way I came, back down to Kobaru. 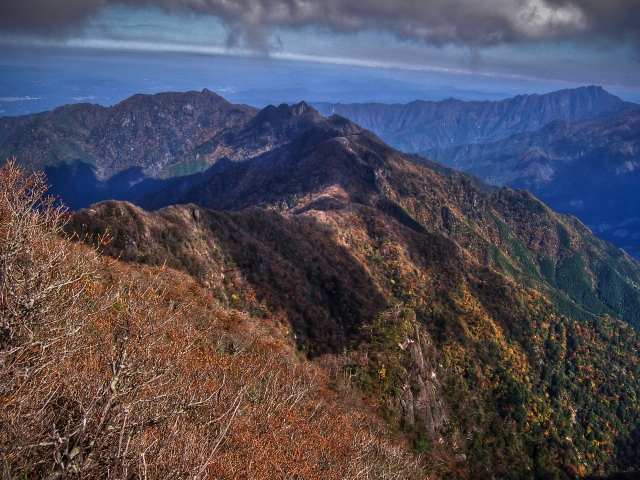