Ena-san from around Misaka Pass

Beyond the southern end of the Central Alps a broad topped mountain rises out of the lesser, nondescript ranges acting as a backdrop to the small city of Nakatsugawa.  This is Ena-san.  A peak I’d long cast an eye over whilst venturing further afield when my train rides took me through the Kiso district.  It was always a case of cast an eye over and cast aside.  Other mountains held more allure, had their access more constrained by the seasons, or timetables.  Ena-san, though past Nagoya, was within reach of home.  A quick bullet train ride to Nagoya and express train after that to Nakatsugawa was all that was required.  She was one of those peaks I could climb at relatively anytime.

In the end, it was only on my way home, with 98 of the hundred mountains in the books that I dropped by Ena-san.  The last of the Alps lay in my rearview mirror and I took a slow train out of Toyama to Nakatsugawa the day after getting off Yakushi-dake.  Ena had sat patiently waiting, knowing her time would eventually come.

The morning after that I set out for Ena.  Another bright October day was promised.  With no buses up to the trailhead at Misaka Pass I was braced for another wallet wringing taxi ride.  The cabbie smelt ‘sucker’ – or so he thought – as I approached I’m sure.  He’d probably spotted me as soon as I stepped out of my dingy little hotel across from the station rotunda, still bleary eyed and with a Seven Eleven breakfast settling in my gut.

I pointed out Misaka Pass on my map.  Having such a resource in my possession didn’t deter him in the least.  The drive to the pass according to my map had us bound for a straight run out of town and quickly into the hills up a multitude of switchbacks.  In reality the ‘straight’ section seemed to last longer than I expected and though the road began to curve and wind, I suspected we should have been negotiating tighter bends if my map was anything worth relying upon.  On we went through foggy hamlets into the Kiso countryside.

The last time I’d decided to give Ena a miss and head for other mountains was when I came off Haku-san, some ten peaks earlier, in the September of that year when my final mountain sojourn was commencing.  I’d studied the best way to get to Nakatsugawa from Haku-san and decided hitching a ride along a certain Route 256 would be my best bet.  Once beyond Nakatsugawa to the east though, it runs out into the hills north of Ena and when I spotted a 256 on a road sign flash by me in the cab I knew I was being taken for a ride…whilst being taken for a  ride.

“Wait! Wait! Wait!” I suddenly bellowed from the back seat, startling the driver, “Stop! Stop! Stop!  Where the hell are we going?  Ni-go-roku!” I hollered the route number at him.  “No, no, no!” and I brandished my map, pointed at Misaka Pass and ordered, “Meter, stoppu!” in my best Japanese as I pointed at the 5000 yen fare already clocked up on the digital display.

I really have no idea what he thought but he seemed contrite as much as I could make out, and he stopped the meter.  Some time later we made the pass and I organised for him or a colleague to return and collect me later that afternoon.  A few other vehicles were parked at the side of the road and as I checked the way ahead on my map a middle-aged Japanese fellow with a white towel tied around his head walked up and said, “Hi!  Let me take your photo!”  and motioned for my camera.  I stood at the trailhead sign and he fired off a couple of shots and handed the camera back to me.  That was kind of strange, but I guess he thought I should have a memento of the place.

Misaka Pass, is where the Nakasendo, the old inland route of lore between Kyoto and Tokyo, used to run, before diverting along the Kiso Valley.  Fukada-san also mentions an old route up the mountain from the Ena Shrine that is so lengthy that it is interspersed with twenty staging posts rather than the traditional ten found on many mountains in Japan.

From Misaka Pass, I strolled through a rolling upland of bamboo grass before the trail led me into woods sporting all the hues of autumn.  Once hitting the trail that traverses the long summit ridge the forests turned to scatty, spindly conifer and the bright autumnal colours were replaced by dark and monotone.

A crowd of hikers picnicked in the woods on the summit.  All views were hemmed in by the trees.  Ena-san rising to just below 2200 metres was my first forested summit for a considerable time.  Not since summiting Tekari-dake at the end of the previous year’s summer had I sat in a woodland setting on top of a mountain.  I didn’t sit there long though and quickly returned the way I had come.  So quickly in fact that I made it back to the pass about an hour before my scheduled taxi pick up. 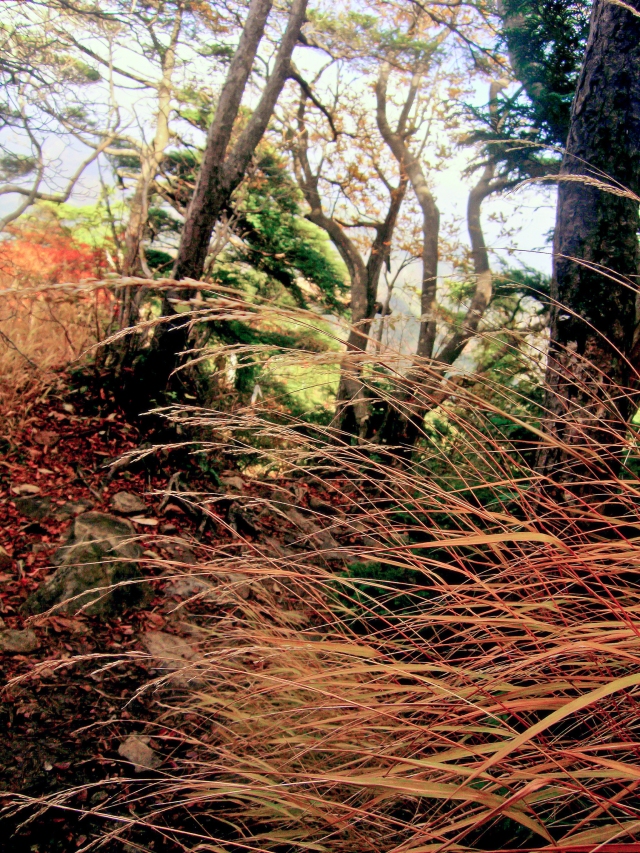 I swallowed some water and decided, instead of hanging around up there in a chilly afternoon breeze, to start walking down the road to Nakatsugawa and meet the taxi on its way up.  Who knew – if I made good progress I might even knock a thousand yen off the cab fare.

Well progress wasn’t made.  Not on foot anyway.  I think I made it around a solitary switchback before a black family wagon pulled up and asked if I wanted a lift down into Nakatsugawa.  What could I say but yes.  A guilt ridden yes at that, but one I reasoned would get me back to town in time to cancel the cab.  But what cab firm had I used that morning?  As I rode in comfort down the winding road I tried to recall something as simple as the colour of the taxi but I couldn’t be sure.  Had it been the usual black or something else?  I’d paid barely any attention to such details.  I sat alongside a wide-eyed sister and brother duo and while I chatted about the usual mundane things to the parents in the front seats – home country, job, how do I like Japan, what about Japanese food – a white taxi with aquamarine fenders sailed up the road past us.  Instinctively I sunk in my seat.  But those hadn’t been the colours of my taxi – had they?

In the end, I collected my bag from my lodgings of the night before and slunk guiltily out of town before any rogue cabbie spotted me and gathered together a lynch mob.  With only one mountain left standing between me and Hyakumeizan glory the last thing I needed was to be kneecapped and strung up by some of the local populace.