ONCE MORE, WITHOUT FEELING 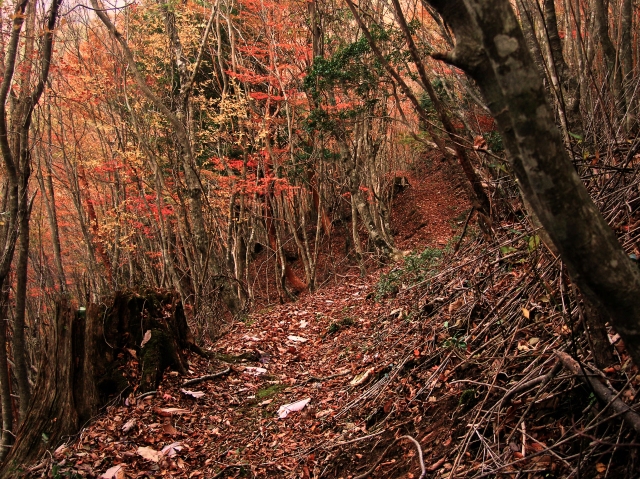 The woods were quiet there deep in the folds of Kansai’s Daiko Mountains.  Neither breeze nor bird stirred in the late afternoon silence.  I’d taken a path up the into the hills from the outskirts of Kawai, a small village on a fork of two rivers deep in the Nara countryside.  The main route up Odai-ga-hara, the mountain in question, other than a bus ride up a sterile swathe of asphalt, had been washed out by a typhoon some five years earlier and my good old Lonely Planet hiking guide suggested the course out of Kawai as a viable alternative.  Scratched and sweaty from negotiating thickets choking the trail, frazzled from scampering across plunging washouts laced with loose gravel, I realised my much maligned little hiking book was getting in a few of its own last laughs before being consigned to semi retirement on the bookshelf.

I ate in the tent – bears be damned – then snuggled into my sleeping bag as the night air cooled and, for the final time on the trail, engaged in my bedtime ritual of counting mountains in my mind to send me off to sleep, “Ibuki, Yotei, Iwaki.  Hakkoda, Hachimantai, Iwate…” 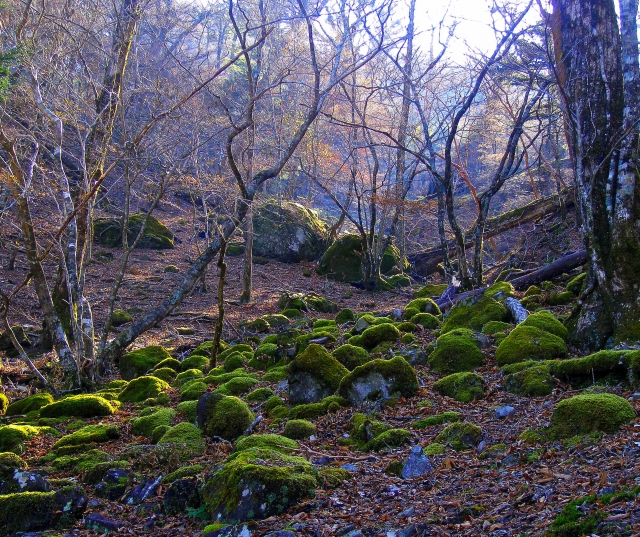 I woke with the sun and breakfasting on the remaining Pringles and Snickers left over from the night before, I surmised any eventual bear encounter was to be further on up the mountain.  The midnight tent site ambush I’d so vividly imagined having failed to eventuate.  Packed up and raring to go I strode off along the leaf strewn trail that wended its way, over the course of the morning, through virgin forest and up onto the high mountain tableland of Odai-ga-hara.  As the ground in the open woodland levelled out I came to a rope with a sign barring my progress.  I recognised the “Do Not Enter” part in bold Japanese but was sure as hell not interested in paying any attention to it at that point.  With 99.75 mountains out of a hundred under my belt it wasn’t time to turn tail at the sight of a pesky little sign in the deserted woods.  Oblivious to the incomprehensible small print, I stepped over the rope and hoped it wasn’t bearing a warning about the over protective mushroom foragers hell-bent on protecting their territory as was often the case when the seasons turned autumnal in Japan.

The path onward soon became smothered in fallen leaves and indistinguishable beneath them and I followed a rope laid over the ground, and slung low from tree to tree, assuming it would lead me in the general direction I needed to go and not off into some mushroom hunter’s lair.

Arriving at a viewpoint sporting a panorama across to the main summit plateau, the trail emerged from the leaves and I followed it down into a depression where a pair of bounding streams met, then, around mid-morning, I stepped out of the woods and into Japanese mountaintop civilisation.  Halfway across the traverse of an enormous car park I hunkered down for some sustenance – a bowl of noodles and a Coke –  amongst the empty tables and chairs of an oversized visitor centre.  Once sated I rejoined the trail in search of the summit on the eastern edge of the plateau. 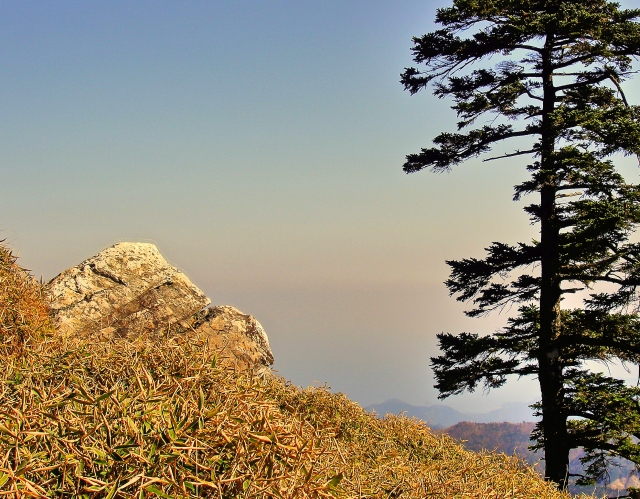 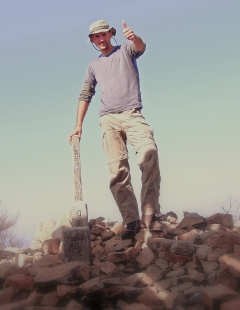 And then, two and a half years after standing in the shadow of a looming Ibuki-yama, there it was, a point of sasa coated land poking up beyond a lookout with views down to the sea half lost in a pale blue, midday haze.  A flight of wooden stairs led to the top and beside a log shelter, supposedly built for lightning avoidance, poking out of a pile of stones, stood the final summit marker on my Hyakumeizan quest.  And that, my friends, was that. There were no dancing-girls or hundred gun salutes, no firework blasts or confetti showers – not even a bear hug. I slumped down on a log and waited for something to happen – to be overwhelmed by some kind of feeling of triumph.  A sign in front of me pointed out the trail down into the closed, typhoon damaged course running through the gorge of Osugi-dani and I wondered when it would ever reopen.

An old girl in a floppy hat, one half of an elderly couple packing up their picnic lunch, smiled and said “Konnichiwa,” and handed me a mandarin.  I thanked her and nodded a greeting to her husband as I peeled the tiny morsel and savoured its tang.  It had been a hell of a journey from Hokkaido to Yakushima and halfway back again.  All that sweat, all that pain, all that torment and exhilaration, all that malignant heat and bone chilling cold, all that money…all that for the reward of a sour mandarin from a gap toothed old grannie.  Bugger me.

Would I do it all over?

You bet.  In a heartbeat. 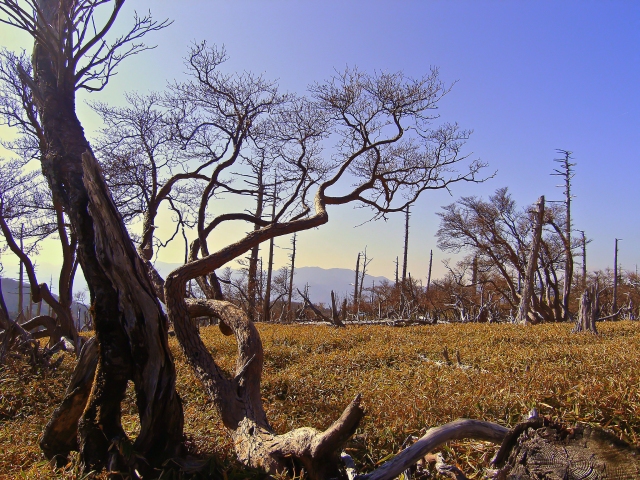 2 thoughts on “ONCE MORE, WITHOUT FEELING”