After reclaiming my pack at the hut below the summit spire I took to the crumbling ridge falling away from Yari to the west, a satisfying gravelly crunch sounding from beneath my boots as I went.  I was bound for the Sugoroku Hut some three hours hike away and after that the peaks cradling the headwaters of the Kurobe River at the heart of the Northern Japanese Alps.

As the afternoon hike progressed, cloud banks swept in from Kasa-ga-take, wraithlike, drifting on barely a breath of breeze.  I turned and watched the soaring mass of Yari vanish behind a drawing curtain of white.  At times cloud cropped vistas revealed themselves.  Down to my left I spied the idyllic Kagami-daira, a small plateau dotted with lakelets and firs, with a hut standing in its midst I made a mental note to visit it someday when the need to get on with things was less pressing.  Something volcanic, a scar of sulphur encrusted earth amongst the vegetation, hunkered at the head of the valley down to my right where, according to the map, a clutch of onsen nestled, further downstream.  As the air currents ebbed and flowed over the ridge I caught a whiff of sulphuric gases on the wind.

Stone cairns led me over a final rise and down a switchbacked track to the Sugoroku Hut.  Washiba-dake and its neighbour Kuro-dake rose somewhere to the immediate north but all views were finally engulfed for the evening in thick, mountain mists.

After dinner, over beer and sake, I was interrogated by some fellow lodgers about my Japanese mountain adventures and when they heard I was bound for the Mitsumata Hut the following evening, they simply stated, in dire tones, “Oh.  It’s cold.” 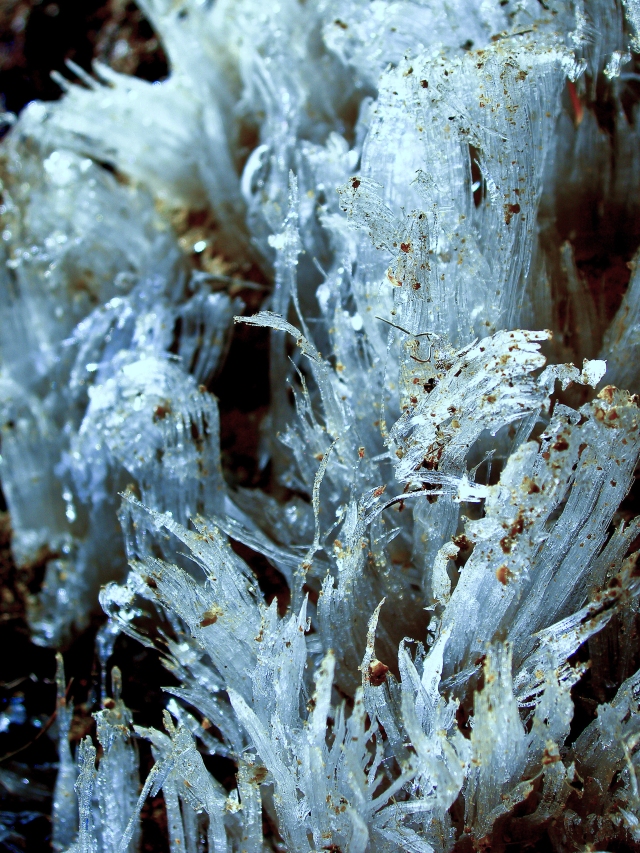 Clear skies greeted us all the following morning and I was out on the trail straight after breakfast.  Washiba faced me across plummeting terrain and I followed the trail around to the west, staying on the high ground but foregoing the climb to the top of Mount Mitsumata.  Yari behind me was a looming dark silhouette set against a streaky high clouded backdrop.  A cold wind buffeted me, ice crystals grew out of the ground at the trail’s edge and puddles had frozen solid.  All signalling the oncoming winter, surely only days away at those altitudes.  Head high brush pine enveloped the trail on the final approach to the Mitsumata Hut and I emerged to be presented with the view of Washiba-dake, rising practially at the hut’s doorstep, bathed in sunlight.  In contrast, Yari was rapidly being consumed in ominous looking tendrils of cloud. 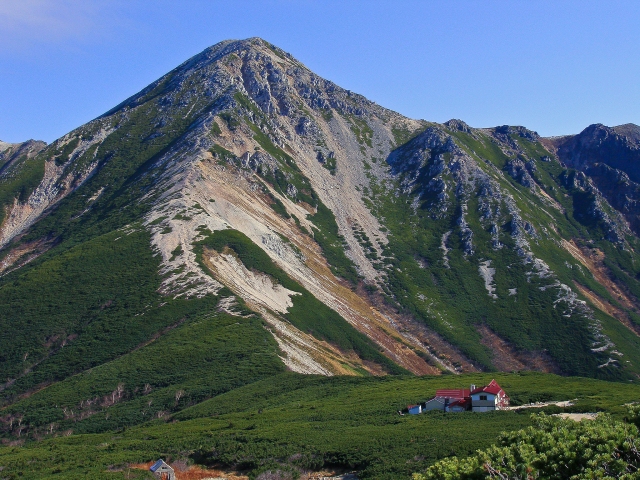 Washiba-dake and the Mitsumata Hut

I’d planned to summit both Washiba-dake and its cohort Kuro-dake reclining to its immediate north and then be on my merry peak bagging way the following morning.  Suddenly, I had an eagle eye’s view of how rapidly the weather could change in the mountains.  After checking in and dumping most of my gear at the hut I slid open the heavy door and was met with a fearful gust of cold mountain wind and no view of Yari out to the east at all.  It was an Utsugi style ascent.  A lung bursting effort to the top of Washiba.  Another supposed ninety minute climb slashed to a third of what the map promised.  I collapsed beneath the summit post in a blustery mountain gale that flung fertilizer sized pellets of ice to the ground and stung bare skin.  I swear I could reach up and virtually sink my hand into the descending ceiling of cloud.

I feared thunder and lightning.  The episode on Shiomi was suddenly replaying in my mind.  I fled off Washiba’s summit to the north, still hoping to tackle Kuro-dake before lunch time.  I found a boulder to shelter behind and slung on my rain jacket and pulled the hood tight as the tiny ice flecks continued to pelt me.  Breathless, I scampered over another lesser peak on the trail and arrived at a junction.  I heard a rattle of thunder.  The wind swept over the mountains, building in strength.  Snow from previous falls blanketed the way ahead on the north path to Kuro-dake, now lost somewhere up ahead in cloud.  More thunder.  More wind.  More pellets of ice rattling on my shell.  I got the hell out of there and fled back to the hut.