I would climb with a heavy heart:  to Tateyama, out of Toyama at the northern end of the north-western arm of the North Alps.  It was a relatively easy trip from Osaka.  A mere Thunderbird ride away for the most part.  Thunderbird as in the express train, not rocket ships piloted by puppets.  It was the weekend after the one spent on Kaikoma and Senjo.  A weekend, sitting a hair’s breadth out of the icy clutches of winter as clear, snowless conditions held.  I would summit Tateyama, one of the three holiest mountains in the land followed by Tsurugi, one of the more fearsome, said by the mystics to be reminiscent of the depths of hell.

All sorts gather at Murodo, perched up at 2450 metres, on the high plateau below the soaring crags of Tateyama: hikers, climbers, onsen soakers and city slickers.  There stands a clutch of huts, a bus terminal and hotel.  An aberration on the landscape that seems, down at gaudy souvenir stand level, to swallow the whole plateau.

Eighty percent of those Murodoites don’t venture far.  They stroll through the highland fields, wander down into the steaming hells of Jigoku-dani if they’re feeling adventurous or take to the underground trolley cars running through the mountain to the ropeway on the other side that’ll then whisk them down onto the high wall of the mighty Kurobe Dam where another labyrinthine tunnel system awaits beyond.  Of course, at Murodo, with all the comings and goings, the place seems overrun.  I couldn’t wait to get out of there and upon locating the trail to Tateyama a hop skip and a jump off the observation deck steps, the masses parted and fell away behind me.

Hikers dotted the path to Tateyama and I fell in with them up to the pass at Ichi-no-koshi.  From there the view south was spectacular on that crystal clear autumn morning. The line of mountains stretched all the way over peaks I had yet to scale, all the way to Kasa-ga-take and the thrusting spear of Yari.  You could walk there from where I stood in about a week, camping or sleeping in huts along the way.  They say it’s Japan’s ultimate multi-day trekking adventure – or soggiest if you pick the wrong season.

Immediately to my left Tateyama rose above me, presiding over this gateway southward.  Three hundred metres of near vertical scramble would get me to the top.  You could make out the course by picking out the brightly clad hikers scaling the rocks.  The trek south would have to wait for some other time.  I knocked back a bottle of water and hit the heights. 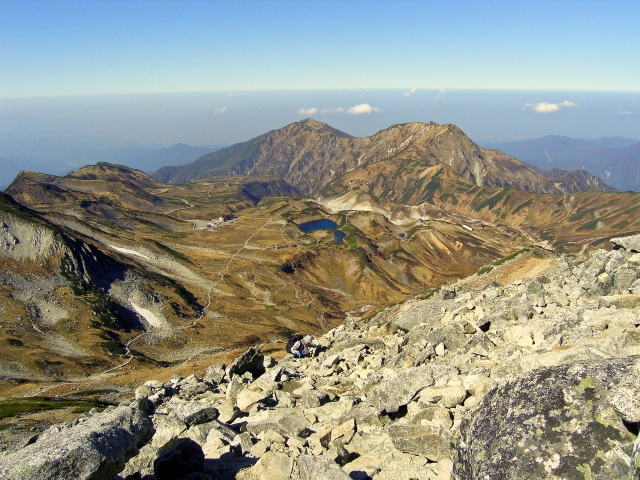 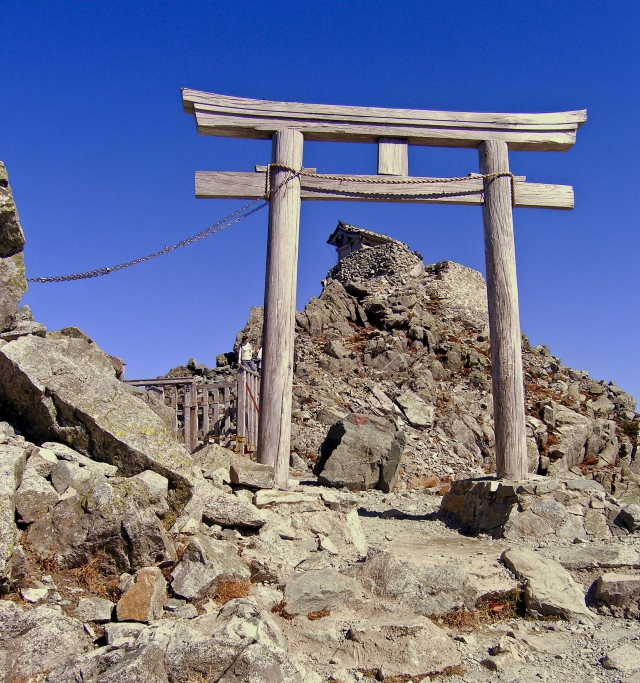 The steep climb ended at the mountaintop shrine.  Hikers milled on its stone ramparts taking in the endless views in all directions.  Murodo from that height appeared to be less defiled.  The dam on the other side of the mountain, far below, filled the Kurobe Gorge with aquamarine waters.  Above it, to the north, on the opposite arm of the Alps sat Kashima-yari, Goryu, Karamatsu, and Shirouma.  I had ogled the mountains I stood on now from their summits the autumn before.  After taking in the sumptuous views I left the last of the hikers behind and wandered on alone, beyond the shrine, strolling across the crown of Tateyama to its highpoint at Onanji-yama.

I took in the view out to the hellish crags of Tsurugi, reclining to the north, beyond the white stoned top of Bes-san.  Descending to fields of stone criss-crossed by trails leading down into the valleys I met a lone hiker.  He pointed toward Tsurugi and said they are making a film about that mountain such was its fame.  The last of Japan’s big peaks to be conquered…or so it was thought.  I stared hard and tried to spot a route to the summit amongst the rugged indentations on its southern face.  From that distance it appeared impossible but I knew, somehow, a course wended its way up through its hellish visage. 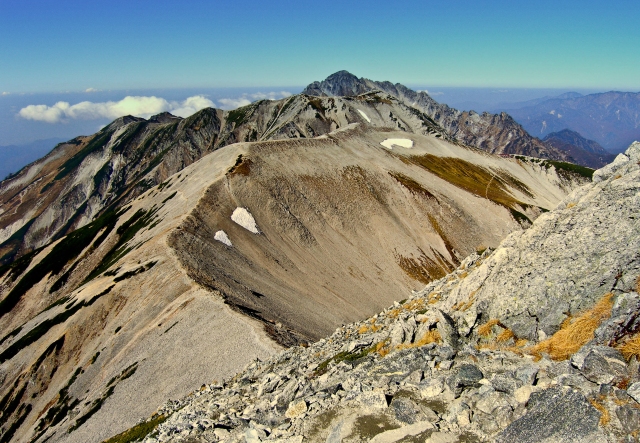 I took my time and strolled the high paths to my lodgings for the night, high up in a nook in the mountains between Tateyama and Tsurugi – halfway between heaven and hell.  Once there and checked in and after being presented with a whole room to myself, given the dearth of hikers at such a late point in the season, I climbed to a spot above the hut and sat amongst the wind tousled creeping pine.  Tateyama reclined over my left shoulder and what I assumed to be Haku-san far to the west sailed high on a sea of cloud.  Cloud banks gathered at Tsurugi’s shoulders also, and I wondered if the favourable weekend forecast would hold.  I watched the mountains turn a pale orange and the gasses rising out of the hells of Jigoku-dani mingle with the slowly drifting mountain mists.  And as the sun set over the world I was overwhelmed, not for the first time, by the course the last number of days had taken.  And there alone in the creeping pine I sobbed.  I sobbed for my mother and how she was cruelly being taken away from us all.