THE HORSE MOUNTAIN OF KAI 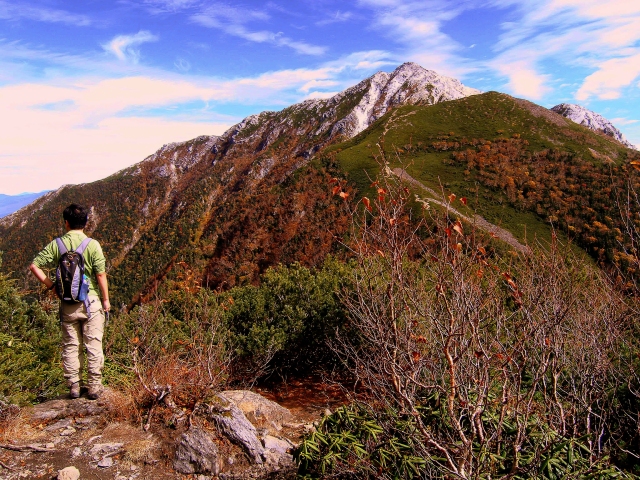 The seasons had well and truly turned before I set off for the Southern Alps one final time.  The mountains in that soaring range had become my haunt for the best part of my hiking year.  Having slugged through the snows of Houou in Golden Week, sat out storms on Shiomi and been battered by winds beyond Akaishi in midsummer, it was time to turn to the sands of Kaikoma and the gentle curves of Senjo-ga-take – the two remaining peaks on my Southern Alps hit list.

Free from the bonds of work for a weekend, I set forth for the city of Kofu once more, riding the last trains out of Osaka and then Nagoya.  I think it was past midnight as my train eased into the familiar station and I wearily disembarked and wandered out to the bus stop rotunda and dumped my heavy pack at the stop where the one of the buses into the mountains would be collecting me before dawn. There was to be no hotel stay this time.  I was watching the wallet – hoarding cash for a Christmas flight home and a second summer of the year, this time to be spent lazing at sea level.  The bus stop would be a good enough bed for the handful of hours before the early morning bus into the Alps.

I unrolled my sleeping bag and slipped inside, stretching out on the hard bench, using my bundled jacket for a pillow.  Sleep was difficult to come by and somewhere around two, when I may well have just been fading off, the local yahoos invaded the station on their demufflered scooters, bikes and drift mobiles, rev rev reving the guts out their gutless machines as they circled the precinct until the police showed up in their vehicles armed with loud speakers and a willingness to do little else but join the parade and berate the hoons – round and round and round…

I slept instead, in snippets, on the bus ride into the mountains.  Over Yashajin Pass and down to Hirogawara beneath Kita-dake, where I had to wait, in cold, sunless light, for a second bus up to Kitazawa Pass and the campground snuggled between my final two peaks. 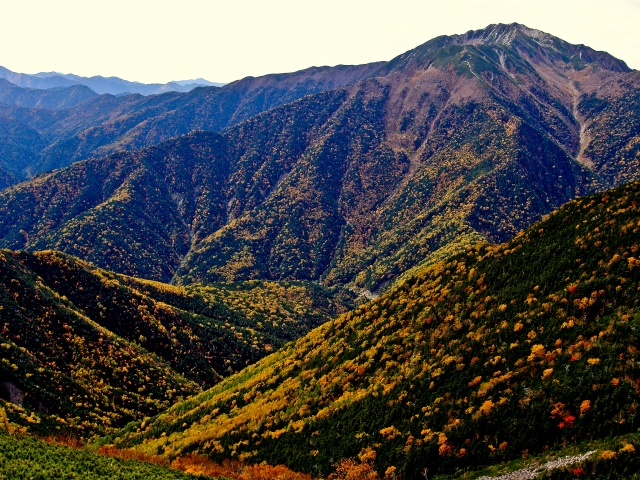 At Kitazawa I paid for a patch of gravel in an overcrowded campground and set up my tent ready for my return that afternoon.  Slinging gear unrequired into my tent I zipped it up, located the trail up Kaikoma and headed into the trees.

Fukada-san singles out Kaikoma-ga-take as one of his undisputed favourites.  He reckoned that if he was restricted to selecting only ten of Japan’s finest mountains, Kaikoma would easily make the cut.  Its pyramidical form, he went on to note, it’s summit sands and resolute posture combine to make it the most beautiful of all in the Japanese Alps.

He climbed like I did, at the height of autumn.  The colours blazing across the flanks of Kaikoma and its neighbouring peaks were astounding in their brilliance.  I wasn’t the only soul out there on the trails that weekend.  Hikers gathered at viewpoints and soaked in the panoramas.  One bearded chap had lugged up an easel and canvas and sat amongst the boulders painting the scene, exhibiting monklike patience at the endless stream of passing hikers stopping in front of him to take in the view and sticky beaking over his shoulders, oohing and ahhing in his ears. 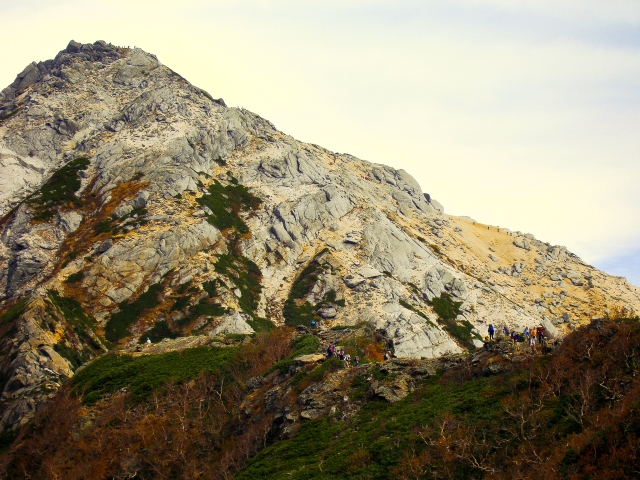 I took to the so called expert course on the final summit approach.  It didn’t appear too challenging but my thinking was label something ‘expert’ and you’ll scare off half the grannies out scrambling around the hills anyway.

On the white, sandy summit I rejoined the crowds and spied Fuji-san rising out to the east beyond the three peaks of Houou-san.  To the south, Senjo-ga-take rose immediately before us and Kita-dake reclined to her left.  Beyond, the trails I’d traversed over the summer holidays wound their ways south over Aino, Shiomi and their counterparts.

High cloud slowly filtered the light and leant a richness to the colours, and with a summit photo taken care of I scooted down the main trail, white, sandy and slippery, into the treeline.  Kaikoma was a beauty.  It had been a long day of climbing after a sleepless night and I took to my tent like a weary tramp stumbling into a lord’s manor and passed out almost instantly.