A CASE OF BAD WIND

Two days down, two to go.

I climbed out of Hyakkanbora. Cloud sailed on high winds against the backdrop of blue, end of summer skies and green, brush pine clad mountains.

Over Rabbit Mountain I bounded and down into a merciless drop on the other side.  Hijiri-dake soared overhead.  Every step down needing to be reclaimed on the way back up.  I paused at the tiny ‘Rabbit Hutch’ Emergency Hut that my dog eared Lonely Planet hiking guide book described as ‘not luxurious’ and thanked the mountain gods that I didn’t have to hole up in that crumbling little concrete bunker.

At the bottom of the deep saddle I steeled myself for the long climb up to Hijiri’s summit.  Summer flowers clung to gaps in the precipitous stone walls of the mountain.  Snow gnarled branches made for convenient handholds.  Cloud masked most of the views and cloaked the trailside grasses in a soft morning dew.

I clambered onto the summit of Hijiri-dake well and truly spent.  Where once I may have taken more breathers, my newly acquired dread of bad weather had pushed me onward.  I threw myself down on a bare summit shrouded in a thin sunlit mist, illuminated like a wedding veil, but driven by a howling mountaintop gale.  Grit stung my eyes.  I pulled my straw summer hat down low on my brow.  Hijiri-dake is the southernmost three thousander of the Southern Alps and indeed, in all of Japan.  Beyond Hijiri the mountains tumble toward the Pacific, fizzling out before they reach the coastline.  There in those dwindling undulations Tekari-dake rises, the last peak on my Southern Alps swing that summer.  With Hijiri’s crown underfoot, the focus was to get far enough along the trail to be able to take care of Tekari the following day.

But, before pressing on, I gave the mists a chance to lift while wandering around the elongated summit.  I sucked on a bottle of water and chilled by the winds, slipped into my windbreaker.  The views never materialised.  No glimpses of Akaishi-dake to the north or Fuji-san to the east.  The mountain remained strafed by the winds and that brilliant thin veil of cloud. I snapped off my summit shot, gathered up my gear and dropped immediately off the summit on a slippery, gritty trail, never escaping the cloud filled air.

Below Hijiri, and beneath skies heavy with cloud I entered an open glade and ordered up a plate of curry rice at the Hijiri-daira Hut.

I was tempted to stay there.  The next hut on the trail was a four hour ridge walk away.  The cloud wasn’t bright and airy anymore.  Ominous would have been a good word to describe it.  But holing up at Hijiri-daira would turn the next day into a fifteen hour monster according to the times indicated on the map.  I guessed I could’ve probably knocked a couple of hours off that estimate but more trail behind me today meant less tomorrow.

I went for it.

Tomorrow, damnit, Tekari-dake would be mine. 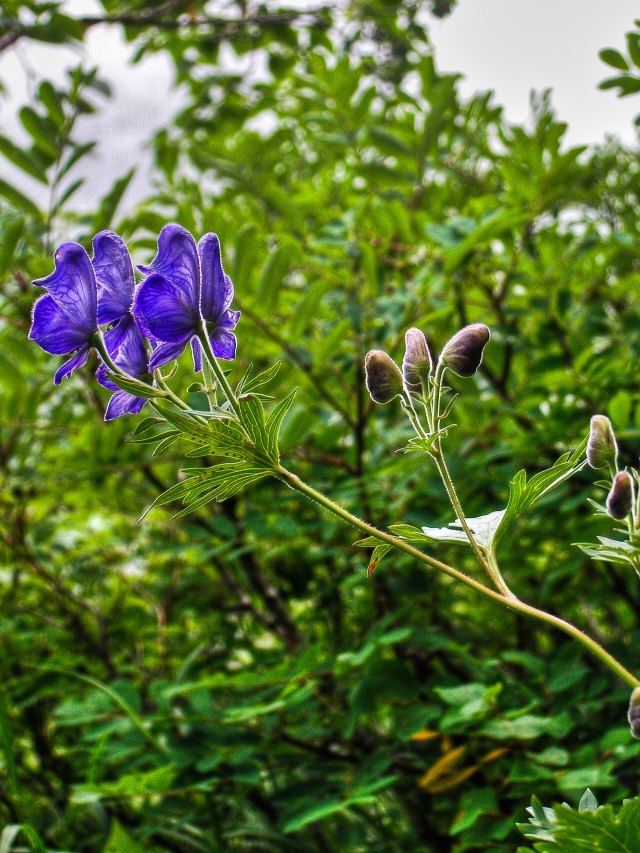