Ontake oozes mysticism.  Congo lines of the devout flock to its slopes in the summer months.  It may not be one of the ‘Big Three’ holy mountains of Japan, but it sure wants you to know it’s up there somewhere on the list. In the early morning light, after a great night’s sleep, attempting to get my mind and body juiced for the climb, I wandered through some of the little precincts reserved for the kami gods, their nooks in the woods chock full with engraved stone. Some of these plots were meticulously maintained, while others had been left to the whims of the encroaching weeds and tangles.

But, that was enough of that.  It was action that was required!  Strolling around those stone monuments wasn’t getting me any closer to the top of the mountain, lost somewhere, in heavy, grey cloud a good 1700 metres overhead.  I wandered back to my loaded pack on the side of the road, slung it over my shoulders and slipped into the forest; a forest of towering trees and delightful waterfalls and, as always, a steep ascent to set me in my place right off the bat.

Damp stream lined trail wound up into drier, bamboo lined tracts carpeting a woodland of startlingly straight timber.  A ratsnake stopped me in my tracks, slithering across the path at my feet, reminding me of the seasons’ procession into summer.  It’s from these forests, deemed as national treasures, that they still harvest an occasional tree for the revered Meiji Shrine in Tokyo.  Also, around those parts the old inland road linking Edo, modern Tokyo with Kyoto, known as the Nakasendo passes. Staging posts marking the route and semi preserved post towns still exist in the district. 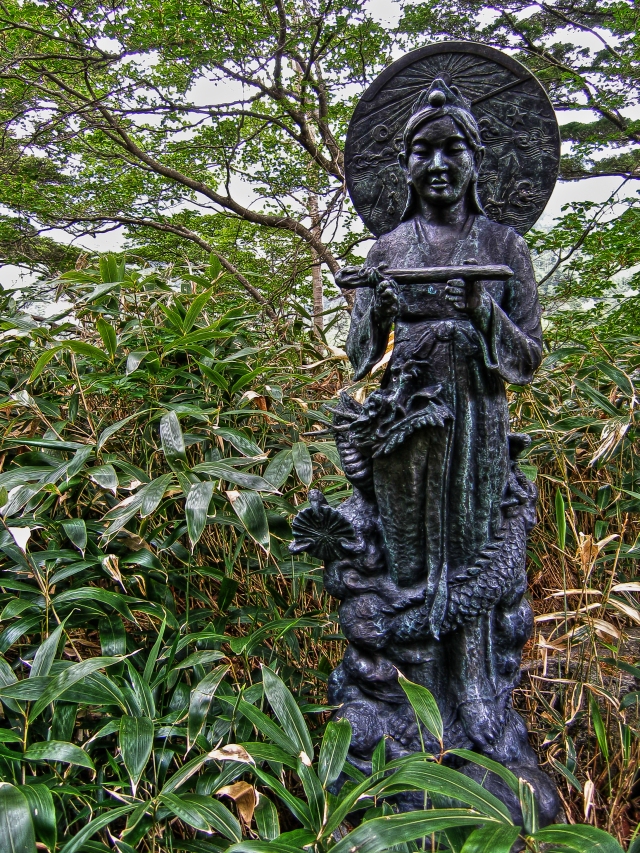 I took a break at a view-point from where beneath a wooden torii gate a woman cast in what I guessed was copper greeted me, a dragon nestling at her thighs.  Across, on the far side of a bottomless ravine choked with glorious woodland a single stream of white water fell out of the forests and into the canopy below.  Above this scene the cloud remained, stubbornly clinging to the mass of the volcano.

Further on, a battle with the bamboo commenced.  Fighting through the undergrowth I soon became smothered with tiny, green nymphlike insects.  As I climbed and cursed, blocks of remaining ice began to clog the trail.  The battle continued until I surprisingly made it to a rope blocking the path I’d just appeared from, to climbers – or rather, descenders.  Stepping over it, I met one of the main trails up the mountain, leading in from a nearby ropeway.

I fed and watered myself on an old wooden bench outside some broken down ski buildings, dumped most of my overnight gear in the trailside bamboo, and stole myself for the remaining ascent.  From that point the forest quickly gave way to brushpine and bare trees.  Twisted by the harsh winter elements they resembled the veins of withered old hands reaching for the sky.  Heavy cloud still clung to the volcano, masking Ontake’s uppermost crags.  I strode a wide, snow laden path to the hut at Hachi-gome, the eighth staging point of ten on the mountain.  As the larger vegetation thinned out, the monuments returned and dotted the path to the summit.  Jagged rock pierced broad snowdrifts, like the spines on the back of a shape-changer, tearing through cloth.  Grim looking visages, riven in stone, eyed me off as I spluttered past, ever higher on my way up the mountain.

Out of shape and well on my way to gaining that 1700 odd metres, the altitude, I suspected began to get the better of me.  I’d been too long out of the mountains but, suffering I though I was, it was fantastic to be back on the trail.  That crunch of late season snow under my feet I had come to love. The glances upward from beneath furrowed brow. The drip of sweat hanging by mere molecules to the tip of my nose, sent shooting off into space by a well-directed exhalation. Hand on hip, the shake of the head, a muttering of something or other, and a willing of the spirit to get on and get up. This was the life I had longed for over those lost months in the city.  Air currents worked at the grey cloud on the summit.  At times, as it drifted on, the crags sliced it apart allowing for brief moments of sunlight to illuminate the snow drifts.  Mostly though, the grey gas was there to stay and as quickly as it was torn apart, it filled in again. Creaky looking huts reclined into the mountainside, sitting on abutments of stone piled up on precipitous slopes, their roofs held down against the alpine elements with scores of soccer ball sized boulders.  I stepped over gaping cracks in the snow and reminded myself that if I found myself stuck on the wrong side of one of those gaps I’d be surfing the down volcano on an iceberg, with only the gnarly trees to pull me up somewhere below. 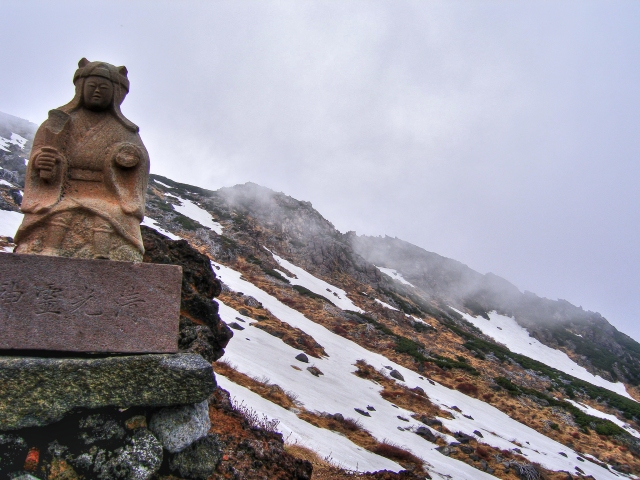 And finally I was up on the crater rim.  A crunch of gravel underfoot once more.  I gasped for air.  Nausea swept over me. Ninety-nine percent of the effort finally over and I could barely move one foot in front of the other.  I sat myself down on a low trailside wall of stone, spat in the dust and shut my eyes.  I dreamed seconds long snippets of nonsense.  What was this?  Was it altitude sickness?  Dehydration?  A bit of both?  I was well on the way to 3000 metres, but it had never bothered me before.  Must’ve been getting soft.  Maybe after months at sea level I’d taken on too much all at once.  I didn’t know, but I felt sick to the gut. I lifted myself to my feet and dragged myself along the gently inclining path with my walking pole.  I crumbled to my haunches in another fifty yards, shut my eyes and the strange random visions came again.  Afternoon tea on the farm.  Kids running rampant at work.  There was no quitting now.  I looked over at Ontake’s crater where ice caking the low inner walls was melting into Japan’s highest mountain lake.  On the far shoreline sat a sorry looking hut and closer, a shrine made up of a cluster of stone figures, monuments on boulders, a brass bell.  Scattered timber trash and a few 44 gallon drums added to the ambiance.

Two more huts, closed, boarded and bolted until July, sat on the summit crag. Having dragged myself there, fifty yards at a time, I then hauled myself up a set of stone stairs to my destination: the summit the shrine and the peak marker. I quickly propped the camera on a rock and got off a few photos before more bouts of nausea, coupled with a searing exhaustion, willing me to sit down and sleep, chased me off the summit.  Cloud obscured any decent views so there was no point hanging about and anyway, I had to get back to my gear and set up camp before nightfall.

There were only a few people on the mountain and I’d passed them heading down as I was going up. Alone on Ontake with only the kami-sama for company, I made it down across the steep snow drifts and back to the hut at Hachi-gome.  There, I slumped down on a wooden bench under the gaze of two bald, serious serious looking statues and slurped some water. The nausea had receded as I descended, strengthening my suspicions that a bout of altitude sickness had been the culprit.  A light breeze whipped up volcanic dust.  Birds chirped away in the brushpine. I hacked up a glob of saliva and scuffed it into the red, gravelly soil with my boot, 4:30PM, I could be down to the rough huts amongst the trees and in ‘bed’ by six.