BREAKING IN THE NEW BOY

The final mountain in the drive for 75 was to be Arashima-dake, a 1500 metre baby a touch south east of Fukui with commanding views out to the mighty Haku-san.

It was to be a twosome that crisp mid autumn day, as Patrick, a Fukui resident himself, was at last ready to join the fray, his foot finally healed after a dreaded descent of his home away from home’s stairwell. From the tiny station at the foot of the mountain there was about 1200m of up to deal with.  For me it was to be another typical Hyakumeizan day hike.  For Patrick, well, he was about to ascend into his own personal hell.  Ibuki way back in April had had her way with me.  Spat me off her summit like a piece of used up tobacco.  As it turned out, I was about to bear witness to the very same ordeal I went through all those mountains ago and all of it from the comfort of my warm, toasty, Gore-texed, hiking boots. 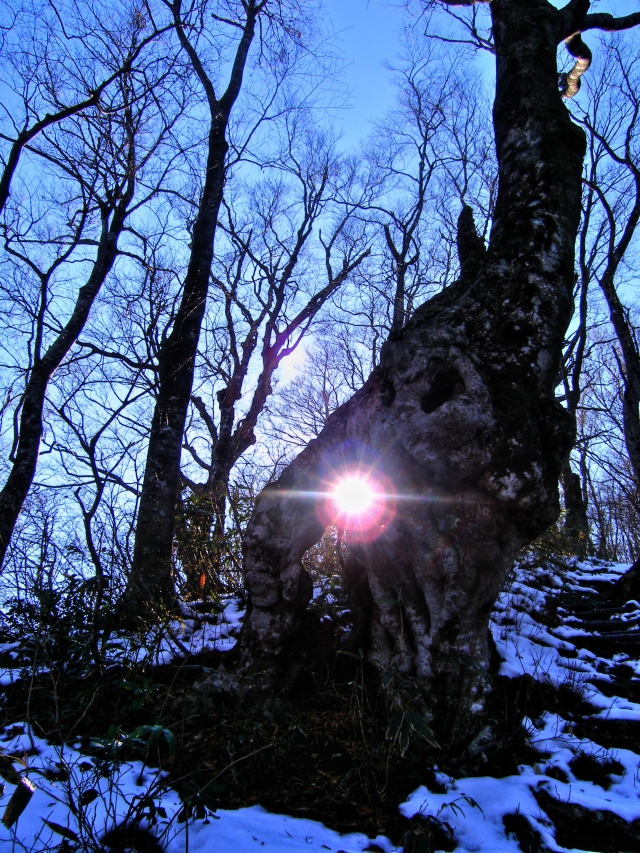 The trail was a well trampled course up an empty, golden grassed ski field, through the first mud and melting ice of the season.  Leafless beech trees cut jagged lines against the crystal clear sky.  Head high bamboo hugged the path.  Alas, Patrick had nothing to hug and I quietly watched as the torment of the trail engulfed him.  Discovering a split in the sole of his right boot halfway up the mountain as the ice finally soaked through to his socks didn’t help matters.  The lack of waterproofing saw to the left foot a bit later.  He had no crampons.  By the time the trail was completely snowed over he was numb toed and stumbling. Sliding around on the icy slopes like a groggy prize fighter groping for the ropes.  To his credit the poor bugger gritted his teeth, gripped the bamboo and hauled himself up the mountain.  His hold on the stringy vegetation far outdoing his grip on sanity.

As he cursed and mutterd in the sasa behind me a pair of old, leathery skinned mountain men descended past him and did their best to hold back their laughter as the sweaty, fogged up glassered, sodden blue jeans clad foreigner hollered a startling, ‘Konnichiwa’ at them cloaked in tones of barely disguised desperation.  “Ohh, gaijin-san, genki desu neeh,” they offered encouragement.  “Genki, genki!” Patrick hollered back at them as if they were two peaks away rather than two feet.

“Oh man, for the last half hour I’ve been virtually semi conscious,” he gasped to me on the peak slumping to his haunches under dazzling blue skies and against snowy horizons. “It was effort enough for me to put one foot in front of the other.”

Fantastic. I loved it.  And I knew intimately, every painful, miserable emotion he was going through.  All mountain – descent included – as he slipped and swore and affirmed countless times over that the whole caper was: “Fucking bullshit,” I saw myself at various points and stages of the past five and a half months. The dripping sweat, the mud caked clothes, sanity on the brink. 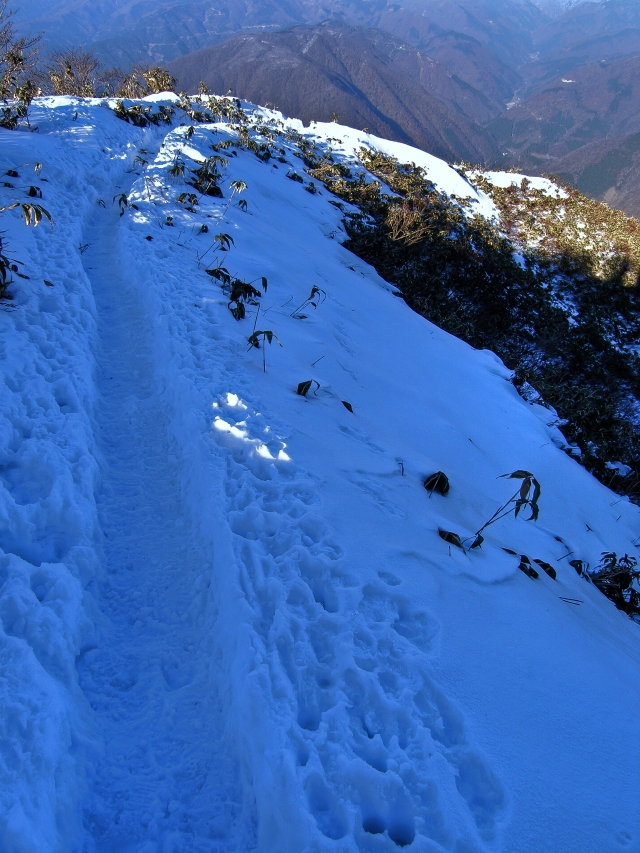 At an open patch we stopped and peered across to the north.  The last of the sun’s rays danced on the peaks surrounding Haku-san, the white mountain, Fukada-san’s favourite, his hometown mountain.

We stumbled over potentially ankle snapping rocks in three quarter darkness in the final hour of our descent, dodged speeding traffic as we crossed a national route and collapsed in the tiny box like train station building.  There we waited in silence, slowly growing ever colder in the dank, early evening air, straining our ears for the rattle of the little heated metal box of a rail motor to round the bend and deliver us muddy, dishevelled and hungry back to Fukui.