I plunged into forests that resembled the stands of Gondwana rainforests of home more than anything I’d wandered through in Japan. But then, Yakushima is a different world from the rest of Japan and from that point on it didn’t take long for my own swooning to start.

By lunch time my trail into the interior met the main day hike trail to Jomon-sugi. A reclaimed narrow gauge train track for the long lost timber trade.  I snacked at Wilson kabu, a spot where a fellow hiker directed me into an enormous, ancient stump, by way of an opening at its base.  He made a heart shape with his hands and pointed to the heavens. Inside the stump, a hunk of tree as large as a small room, was a small shrine. Peering skyward, through the opening above, to the canopy of the forest and beyond, I understood what the bloke was on about as I stared through a heart shaped opening to the heavens.

It didn’t take long for an afternoon mist to settle in the woods as I climbed the rising trail to Jomon-sugi. The cheerful sun dappled woodland took on an air of mystery as I entered the inner sanctum of the Yaku-sugi. Mammoth, grey trunked behemoths lurked, peering out through the mists and tangles of much younger trees. And then up a flight of wooden stairs I climbed onto a deck and beheld Jomon-sugi in silent repose. 4000 years old they say. It first poked out of the earth 2000 years the other side of Christmas. A long bloody time to sit around in one place.  A few fellow hikers stood in awe at the railing beside me. Another, sensibly as it turned out, began setting up his bivvy right there on the deck. It was low season and all the day hikers trekking in along the rails from a closer trailhead had long gone.

I made my way up to the hut and was somewhat disappointed to see what greeted me: an ugly, grey, cinderblock structure littered inside with trash and dirt.  Pale orange trunked trees added some colour to the darkening surrounds, twisting skyward through the mists.

The following day sunlight shone once more and I climbed higher through a thinning, drier forest and emerged on an open ridgeline trail of knee high bamboo and enormous, house sized granite outcrops and boulders and there I finally laid eyes upon my goal of Miyanoura. This place was astoundingly beautiful. Astoundingly. Mountains appearing more like thousand metre high parfaits, the enormous ice cream creations pretty girls devour in shopping precincts across the nation, dotted the skyline. Right then it mattered not that Miyanoura was destined to be mountain 74 rather than 100.  Everything was inconsequential. Nothing mattered as I took in the views. From the start of the hike the place just piled on the wonder.  With sunshine warming my back I realised I was one of the lucky ones to experience this place beneath blue skies. 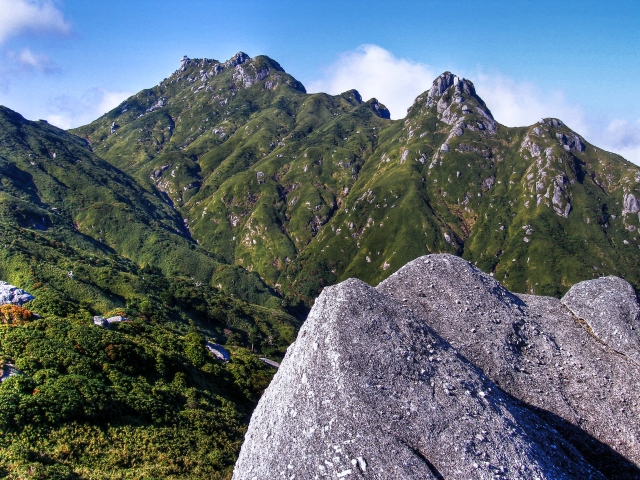 Up and over the lushly bamboo covered Miyanoura and down the other side the vistas kept working their magic. Stacks of stone piled upon one anoter. Enormous egg shaped boulders littered the highland meadows. Streams so clear trickled across the path that I found myself doing double takes to see if they really had water in them at all. Old spindly skeletons of trees cut against the blue afternoon sky as non-threatening cloud drifted into the valleys below.  On a distant mountaintop stood a rock formation resembling sliced bread. Hikers up here were few and far between. I may have met half a dozen souls on the entire traverse that second day. I pulled up stumps at the Yodogo Hut, a reputedly rat infested joint that otherwise appeared more inviting than my lodgings in cell block H the night before. 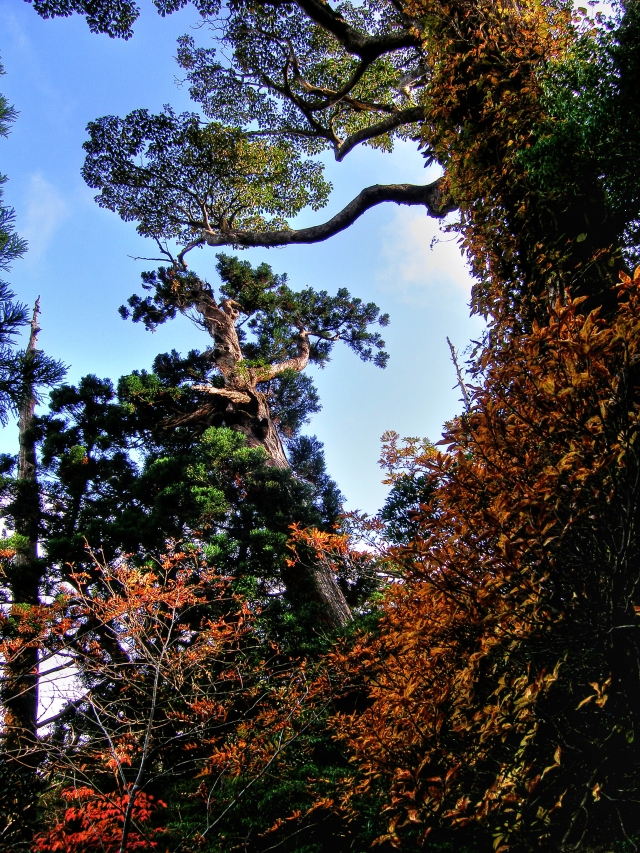 On the last morning I rose relatively late and strolled off onto an overgrown trail. Not many passed this way. If where I had already been resembled a lost world, this was the lost world’s back block. Vines scraped. Tendrils of green moss like material draped down from overhanging branches. It was a long hike back down into the forests and by mid afternoon I emerged at the back of a township and hunted down a room for the night.