I stared aghast surrounded by decrepit, graffiti splattered buildings in various states of decay, crumbling into acres of asphalt and concrete at their foundations.  A raucous soundtrack was pumping from loudspeakers mounted on the roof of a souvenir hall that flogged detritus excreted by the dirty, great, Chinese plastic shitting monster. A ropeway luridly painted, yet weeping rust, ran up a slope no steeper than a wheelchair ramp, obviously constructed for the patronage of those hardy souls truly not up to tackling an incline water would have had trouble dribbling down.

As for the states some of these defiled Hyakumeizan, I couldn’t recall a worse examlple than what I witnessed there on Aso-san.  I could understand the antennae on Utsukushi-gahara.  In this day and age you have to stick an antenna up here and there. Maybe the hotel next door could have been somewhat better fitted into the scenery but antennae, okay, I get that.  Tsukuba too, replete with its revolving restaurant and ropeways and beer and noodle and toad oil stands, I understand.  There was a kind of country fair charm to Tsukuba’s defilation.  The ongoing dismantling of Ibuki via the efforts of the limestone mine on its western flank is a concern I suppose, in this concrete addicted land.  And Kiri-ga-mine has more to offer beyond the ski slopes carved over its summit.  But the disregard for such a dramatic setting as the crater lip of Aso-san was mindboggling. The longer I spent there,  the more I was repulsed by the vileness of the commercial canker festering upon its very core. The grandeur of the place was truly bespoiled. 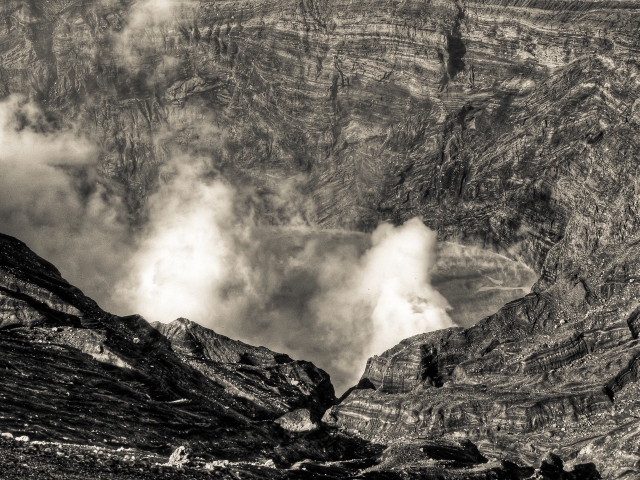 I wandered upward, against the flow of Hermes handbagged humanity.  At the crater rim, hemmed in by more swathes of concrete and topped by hawkers selling brick sized lumps of sulphur to take home and dump in your bath, I leant on the barrier and stared down into Aso-san’s broiling cauldron. A hundred metres below, lost for the most part in rising clouds of white steam and gas, a churning lake of pale blue water swirled like a tormented sea against ochre hued walls. I watched for long minutes, at times distracted, I glanced behind me at a gaggle of giggling school girls as a posse of suntanned, bleach haired men in pale sunglasses and white track suits tested out their respective games upon them.

I came to find solace in the fact that, unlike some of the other tormented mountains of the Hyaumeizan, at least one day, sooner or later, Aso-san will say enough, volcanically speaking, and just blow all the shittiness assaulting her to kingdom come.

‘Just give us a few hours head start, baby,’ I confided to her and slowly turned and wandered away from the crater and her clamouring crowds.

I strode out onto a broad expanse of deserted, dark volcanic sand that ran up to a rising wall of crumbling, barren, ochre rock.  A low crater rose out of the earth to my left, and the towering walls of rock soon closed in around me and I climbed up to a nook and soon walked along the rim of an older crater wall. Taka-dake, the highest of the five peaks of Aso rose before me. Down to my left, the view towards the smoking crater was impressive, the detritus marring her edges less invasive from that more distant point. The land inside the greater Aso caldera, dotted with its fields and roads and villages stretched out to the rising blue walls, some hundred kilometres in circumference, in the distance. I was a solitary soul wandering in a world of varying shades of rust.

The sun warmed the back of my neck. Sweat threatened in the temperate autumnal air. I passed the ruins of an old stone hut and began the final climb to the summit. Up top I took in the view towards the sinister Neko-dake, a dark jagged form sitting off the back of the centrepiece of Aso and was immediately was consumed with the desire to tackle her rocky spires.  As with the enticing trails existing around Sobo, Neko’s date would have to wait. I hoped appearances were deceiving and she wouldn’t be crumbling away to nothing anytime soon.

With the sun turning toward the horizon and I reluctantly rose to my feet after a breather amongst the summit rocks. It was time to venture back toward reality. I felt those hours on Aso, where I’d fled the crowds for the open spaces of her higher ground and then reluctantly turned back towards them, represented a microcosm of the year that had been, and with my impending return to life off the trail, a heavy dose autumnal melancholy suddenly swept over me. I soaked up the views and enjoyed every step of my hike back down to the circus at the bus stop.  There, once more, I took a few more minutes to stare deep into the churning heart of the mountain.

4 thoughts on “A CHARACTER ASO-SAN-ATION”