LOST IN THE SHUFFLE

I devoured soft, brown chocolates and slurped down a cold, brown coffee from a small, brown can as I sat in a brown wooden chair, feet up on my bent, brown bed in my brown, musty room.

The castle’s black for starters.

Nothing more than a sandwich stop on my way to Nagano City ten days before, Matsumoto became the next home base – at least for a week or so.  More specifically the salubrious Hotel Suehirokan – a near derelict establishment across the street from the castle; the town’s most famous landmark.  An interrogation of the tourist information office led me here.  ‘Cheap as possible, close to the station,’ were my direct orders as the quite helpful young lass spread open a map replete with hotel listings.

The friendly, three toothed hotel owner, sporting a heavily layered grey and white comb over – something that wouldn’t budge in anything less than a mountain gale – lugged my pack, slowly, labouriously, like a hunchback, up a dark, brown stairwell where timber carvings of bears and a horse head stared blankly into the gloom.

My room, number 308, was the one with the patched up hole in the wall and the stained, bent lampshade.  The one where the musty, stale smell of old socks or toe jam was half heartedly covered up with the scent of cheap aftershave.  Don’t forget the thinning carpet and the expansive views of the neighbour’s wall – 12 inches away.  The mirror: frameless and propped up on the table next to the television.  The mattress leaked fluff and the red velvet footrest had seen better days.  The bathroom could very well have mistaken for a telephone booth at the rough end of town and the hairline crack in the toilet seat pinched me on the arse every time I sat down to go about my business.

But, hey, it was cheap.  There was a coin laundry round the corner, a convenience store down the street.  It was fifteen minutes walk from the station with the funky end of town in between.  And did I mention it’s across from the castle?

The streets were again, repositories for rain.  Though travel days that coincided with rainy days were acceptable at that most urgent period of the adventure. For my assault on Amakazari-yama, the following day promised fairer conditions.  It was time to bound over the last hurdle before hitting an even bigger one in the shape of the formidable Kita Alps.

On the subject of hurdles, it took old Fukada-san three attempts with a World War in between before he made it to the top of Amakazari, the westernmost of the four Hyakumeizan peaks in the Myoko district.  “I was trying to climb that mountain from Kajiyama in the north,” he wrote.  “At that time there was no hiking course.  I kept struggling but found it impossible going and returned to my home.  Though I didn’t make it, there was still a great view.  The mountain slopes appeared as shoulders, stretched back, with a good posture.  The two peaks of Amakazari look like cats ears standing together.  The whole scene was sophisticated, beautiful.  So then, I tried to climb from the south, from Ootani Onsen, but it rained for four days, so I had to give up again.  The third time, late in October, after the war, I finally achieved it after longing to climb this mountain for such a time.  I went from Ootani again, in a party of four this time, but, as I expected the course only went halfway up.  It was lucky we had a guide.  Once we hit the Omi-gawa there was no course.  We just had to struggle up following the riverbank.  At the top of the river it split in two and we took the left branch, the Arasuge-zawa.  Before we hit the meeting of the waters the way was easy.  After that it was steep, we had to rock hop.  And then the stream became shallower and dried up completely, we climbed over boulders and then I could see a big rock wall, called Futonbishi.  At this point the way onwards narrows and then, after that we had to walk up a steep slope of dry grass.  Finally I could stand on the top of this mountain after such a long time.  Though sunlight embraced the mountains, there was neither breeze nor birdsong.  We lay down on the summit and enjoyed the silence.”

I too, ascended Amakazari from Ootani Onsen after a nerve wracking bus ride up into the hills in a  vehicle that seemed severely oversized for the road it negotiated, a road that hugged valley walls high above gaping, forested maws of bottomless greenery.  At one point, white knuckled, with nails digging into the soft upholstery of the bus’s back seat I swear, as the driver reversed to better manoeuvre around a tight bend, I was perched above hundreds of metres of nothingness.

After a less eventful climb through reddening and yellowing woodland and fields of bamboo grass, I too had the summit to myself.  Cloud from the departing rains still clung to the precipices, curtailing all views toward the Alps as well as all other directions but, mirroring Fukada’s successful attempt, the summit was bathed in brilliant autumn sunlight. 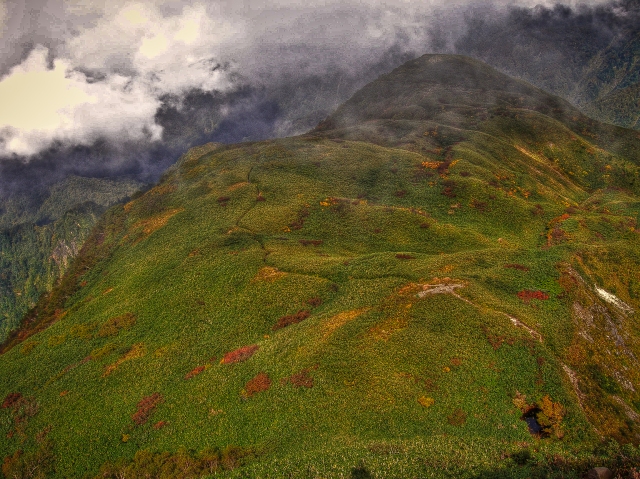 Shoulder of sasa from Amakazari’s summit

Just as Amakazari is, Fukada went on to claim, unfairly overshadowed by the giants of the North Alps across the valley in Hakuba, it was climbed in the shadow of my own impending journey into those mountains and also, somewhat lost in the afterglow of the wonderful weekend out on Hiuchi and Myoko.

I was back on the evening train bound for Matsumoto before, I felt, I knew what had happened.  A feeling of calm, rather than eagerness, to head for the big hills settled over me. The next stage of the journey was about to commence.  The following day promised more good weather, something I dared not waste.