I shivered hard.  It was cold.  Damn cold.  The coldest I’d felt in the mountains yet.  Since the walk to Matsumoto from Kiyosato some ten days before, overnight temps had plummeted.  Deep inside my sleeping bag, I was swaddled in layers of clothes.  Within days I was to be doing the same thing but at somewhere around five hundred metres more in altitude.

Morning had arrived.  Thank heavens I didn’t need to clamber out and pee during the night.  For one, the surrounding ground outside the hut was a spider web of tent cords.  There were more tripwires there than in a boobie trapped concentration camp.  And, secondly, I suspect my bladder had frozen up anyway.  Ice crystals encrusted the poles lining the inside of my tent.  I wriggled up, unzipped the tent flap and struggled out into the morning light.  A heavy, glinting, silver frost clung to shaded ground surrounding the odd shaped hut with its angular, yet spherical blue roof.  Overhead the sky was a dazzling, cloudless blue.  If anymore convincing was required that the seasons were a-changing, that morning on Myoko-san was it.  A rush of exhilaration swept through my soul.  Two more summits and I would finally be bound for the Japanese Alps.  Things were about to get interesting yet again. 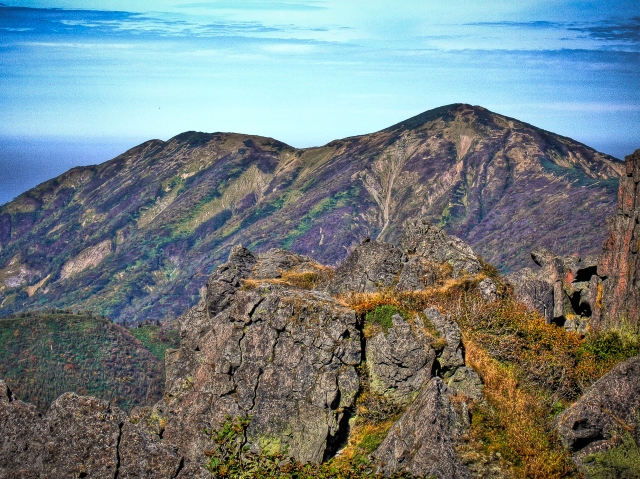 The day on Myoko was splendid.  Serendipity exemplified.  Blue skies, rocky climbs, friendly companions.  The climb from camp involved scaling a forested crater rim and plunging downward on the ‘inside’ before scrambling the rocky, wooded remnants of what I guessed was an ancient volcanic plug.  Once on top, the views out to the line of the North Alps bounding southward from Shirouma-dake were outstanding.  The day was so clear even Fuji-san, far off to the distant south, could be spied with ease.  Dry grasses, already frosted, danced in a warm mountain breeze.  In spite of the overnight cold, it was t-shirt weather by smoko.  I settled down in the rocks and snoozed between handfuls of chocolate almonds and long gazes out into the blue hued yonder.  Others did the same as they arrived and found warm nooks amongst the rough outcrops dotting the top of Myoko.  It was wonderful to have an abundance of time on the summit.  Nobody was keen to depart, everyone lazing about like lizards catching their last rays before winter.

I spent another night at the hostel on Myoko Kogen and the following morning, at a more leisurely hour, returned to the station and passed back through Nagano before choo-chooing off again.  This time back south, to wonderful Matsumoto.