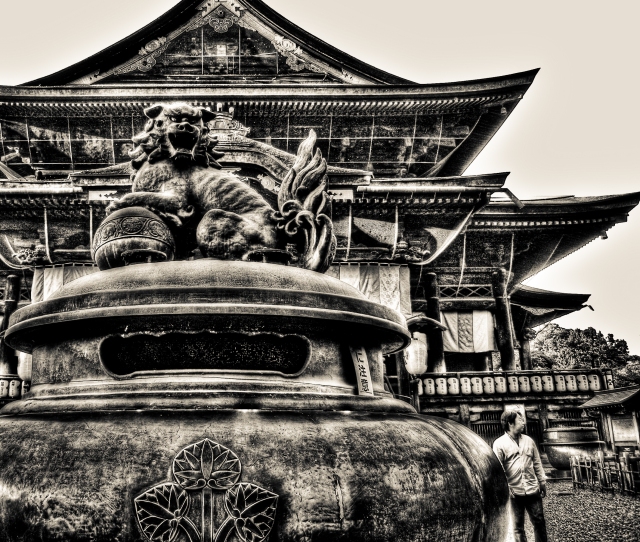 ‘Hello,’ I said to a woman who rose out of her seat to greet me as I entered through the Nagano Tourist Information Office and dumped my gear on a seat.

‘Do you speak English?  I need a hotel room for a few nights, close to the station and as cheap as possible,’  firing off a volley of demands as I approached the desk.

The only other soul there in the office was being attended to by the only other clerk there in the place.  Tall, foreign, English speaker, probably American, glasses, thinning, light coloured hair, some kind of cloth sash strung through his belt loops holding up his jeans.  He was discussing, from what I could make out, getting to a place called Togakushi, head cocked as he pored over the papers placed sideways between him and his clerk.

The lady I’d addressed had opened a file resting at her fingertips and we quickly came to the conclusion that the Nagano Plaza Hotel was the place for me, “Can you speak Japanese?”

“No, no,” I lied.  I mean, though my Japanese was crap (and still is), I could have organised it but preferred to do nothing if someone else was up for the task.  She called ahead and booked the room.

“Hi!” the fella beside me suddenly said, his assistant like mine, otherwise engaged.

“Ah, yeah, maybe five days to a week I suppose.”

“Doing a bit of hiking?”

We found a small sushi restaurant off the main drag through town and holed up in a booth and ordered small colour coded plates of raw fished goodness.  Add some wasabi and soy sauce it was the first decent meal I’d had in nearly a week.

“When did you arrive in Japan?” I asked him.

“This summer.  The heat nearly goddamn killed me.  I mean Charleston, it gets hot, but shit, the humidity here is unfathomable!”  He was leaning forward now, animated again, the rice had fallen from his lip.  “I had basically had enough of the States,” he nodded.  “A buddy of mine lives here now, in Fukui, he’s married to a Japanese.  I pretty much came here on a whim.  Hey, anyway, so tell me about these mountains.  Is Tsurugi up in Toyama on your hitlist?”

“Yep, she sure is,” topping out a metre under 3000 it was a mountain that demanded respect.  Tsurugi was a massive edifice of rock, the last of the Hyakumeizan to be ‘officially’ climbed.  Amongst its crags hikers become rock climbers for a day.

“I’d love to get up that mountain.  Have you climbed it yet?”

“Not yet.  Should be there in a couple of weeks or so, all being well weatherwise.”

“Shit no, by all means.  She’s a bit of a monster by all accounts though.”

Up beyond the glorious Togakushi sits Takazuma-yama, the tallest mountain in the Togakushi Range.  At the end of a long narrow saddle of a ridgeline, its pyramidical form rises abruptly to some twenty-three hundred metres.  From its rocky summit, it offers unhindered views of Myoko-san, a sister Hyakumeizan, and the rugged spine of the North Alps.  Unhindered that is, if you climb in fairer conditions than I had the pleasure of scrambling to the top of said mountain in.  Spared any serious rain before reaching the peak I thought luck may well have been on my side after all and settled down amidst the summit boulders to munch on my replenished supply of good old chocolate almonds and take in the views of thick, glutinous white in all directions.  No such luck.  Fat raindrops fell out of the sky literally the moment my bony buttocks settled into a comfy little hollow.

Unimpressed on a day where inspiration was hard to come by, I hauled ass out of the hills, as those Americans in our midst are wont to say, back into Nagano as fast as my legs, and the bus, would carry me.