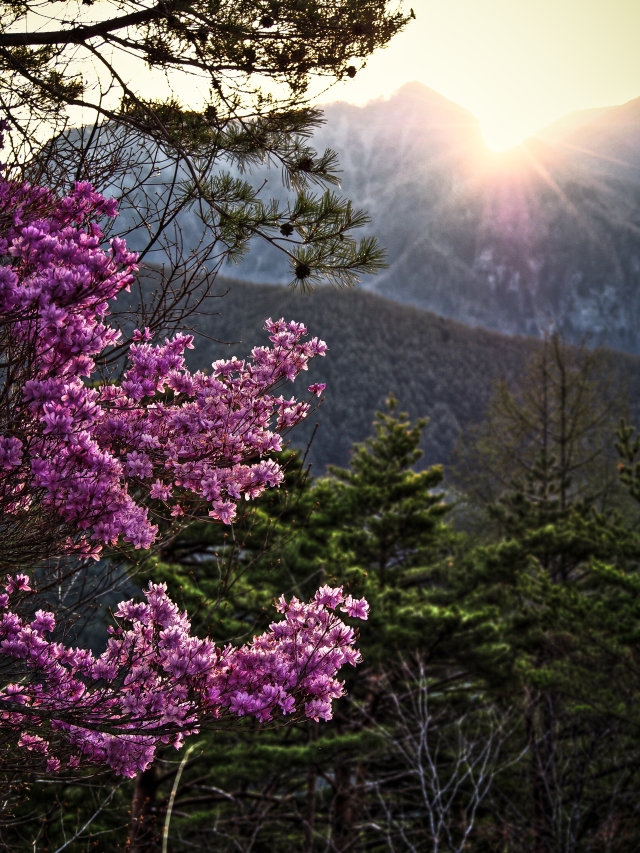 The village of Oshika, in the western foothills of the Southern Alps is a town under siege on multiple fronts.  From Utskushigahara, via the curvaceous and alluringly named Venus Line we’d driven south, turned for home, on our tour of Nagano.

At Akaishi-so, a rambling old ryokan perched in the woods above the village The Missus, The Kid, The Old Man and I made ourselves comfortably at home under the gaze of a menagerie of taxidermed critters sporting unblnking, glass eyed gazes that followed you from one room to another.

It’s from this town some hundred years or so ago that the English missionary Walter Weston, the so called father of Japanese Alpinism made his way, rockhopping up a sawa, to the boulder clad slopes of Akaishi-dake, one of the Southern Alps’ most beautiful peaks.

Our host at the ryokan was regaling us stories of the village’s plight as he lamely (having fallen off his roof), yet gamely swung a van load of us up a switchbacking, single laned road to a remote mountain pass so we early risers were allowed a glimpse of the sun rising over the mountains.  Weston was one of the sources of his complaints, all of which were delivered with charm and good humour.  Apparently this man of the cloth had likened the village’s residents to a pack of backward monkeys.  And much to the chagrin of our chauffeur, upon erection of a monument in Weston’s honour down in town, it became the duty of the villagers by way of some sort of rotation system to spruce it up on a regular basis.

Now, Weston has written a few books or so and I have a copy of the one outlining his assault of Akaishi-dake via the village of Oshika (then known as Okawara) and from what I’ve read the clergyman had nothing but high praise for the locale and its residents…it’s a bit of a mystery…

Maybe it was the Japanese translation?  Or in a later volume; on a return trip the villagers slung bananas at him? Weston, though, is merely a distraction in the larger scheme of things.  Declining population is a concern across Japan and especially in the more rural areas of the nation as the youngsters are lured away to the bright lights of the big cities.  On the other hand, in Oshika at least, the deer population is booming.  In a town populated by blind old buggers who can’t shoot straight anymore and a few younger hangers on hung up on Disney propaganda, raiding the crops is a free for all for Bambi’s Japanese cousins.  Deer trappers snare a few but more often than not find agitated out of towners who’ve gone for a wander in the woods strung up in their hoists.  Bureaucracy permits hunting only on Sundays and everyone without a gun hides under their futons as the old coots head for the hills armed to the teeth.   Apparently the bounty on deer is the equivalent of 200 dollars and any monkeys knocked off in the district attract a cool 300.  The tantalising thought of retiring to the Japanese inaka and popping off the occasional critter for a wad of cold hard cash sounded too much like the good life to be true…

The Old Man wasn’t overly enamored with what is supposedly one of Japan’s most beautiful villages.  Oshika was pretty for sure but wasn’t anywhere on par with Nose (No-seh), an area in Kansai he’d toured the year before.  He’d come away from there impressed with its terraced rice fields and charming inhabitants.  Bigger mountains?  So what, all they did were block out the sun and attract more snow.

Worryingly though, these mountains lining the valley where Oshika nestles may not prove monstrous enough when it comes to blocking out the march of progress.  There’s talk of a new type of Shinkansen or Bullet Train, a Shin-shinkansen as it were.  One that runs on magnets.  Maglev, right?  The train is touted as one of the technologies that will reinvigorate Japan’s cutting edge reputation.

So through the tiny Japanese backwater of Oshika the government wants to  stick the new magnetic line that’ll link Tokyo with Osaka.  ‘Through’ being the operative word as at least two mammoth tunnels would be need to be burrowed out of the mountains as the line shoots across the valley.  The mere construction project would ruin the rustic charm of the place, according to our host, as a constant convoy of heavy vehicles would rattle through the town day and night.  Final decisions on the route of the line were to be made in September.

Who knows?  The noise might scare off the deer.

A shaggy haired staff member at the ryokan, upon hearing of our interest in exploring the Japanese countryside invited us to stop by his village, just some fifteen minutes up the road from our lodgings.  After a breakfast, dotted with the staple sweet, crunchy grasshoppers we hit the track and took up his offer.

Kamasawa, was rural charm personified.  A tiny village of wooden shacks clinging to the mountainside.  Forested peaks soared overhead.  A river glinted in the valley floor far below.  My heart ached.  I’d been a long time out of the bush.  Vermin bounty or no, I was ready to pack up and go there and then. 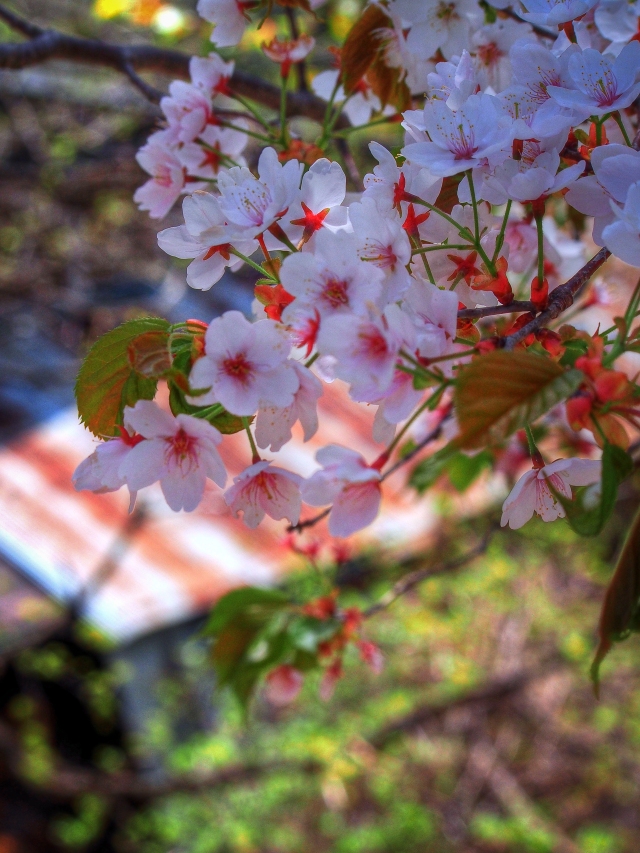 But we had to keep moving.  There was one last destination on our tour:  Shimoguri.  Another mountain village perched high on a valley wall.  We took a convoluted route to get there after departing Kamasawa but the wait was worth it.  I’d passed through the town some years before when hitching out of the Southern Alps.  Exhausted after a traverse of the range, I’d only glimpsed this mysterious little village with a perilous grip on terra firma from between half opened eyelids.  What I’d seen played on my mind and I hankered for a return to the town for a better look around.

Shimoguri is a place where the fields sit at an angle steeper than the roof of your house and the grisly old farmers chip the dirt back up hill during cultivation, in an endless struggle with the elements.  We stayed one night and watched dusk descend with a couple of little girls whose father ran our lodgings.  They were a pair of kids completely at home running through the grassy fields and woods in this lost little realm in one of the most crowded nations on the planet.  How long I wondered before the lure of the bright lights draws them away and extinguishes the sparkle in their eyes. 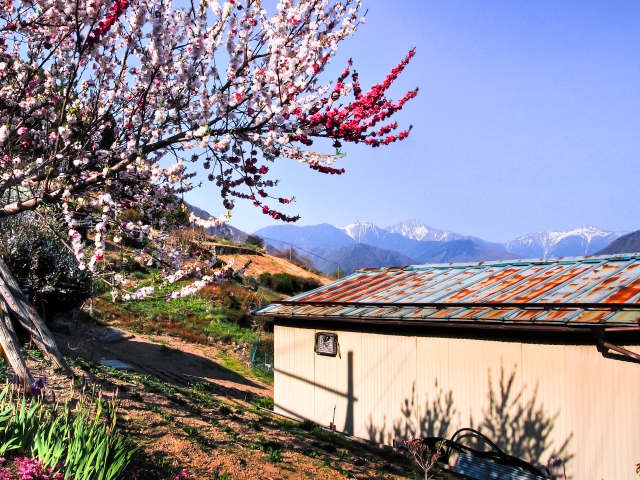 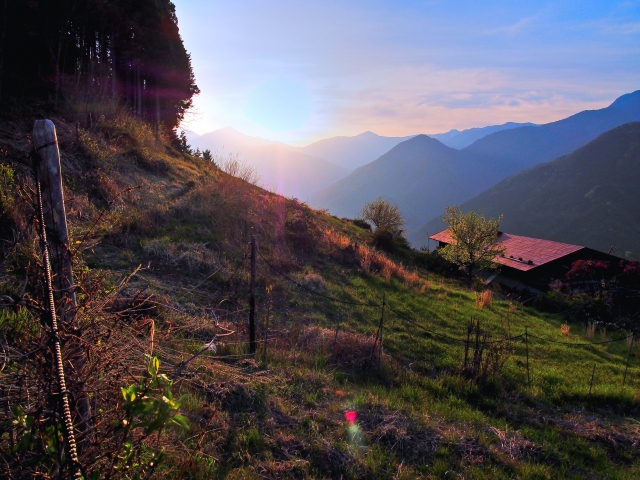 At dawn we walked Shimoguri’s winding streets once more.  Staring down into the gaping maw of the bottomless valley then up high to the majestic Hyakumeizan peaks of Hijiri and Tekari. 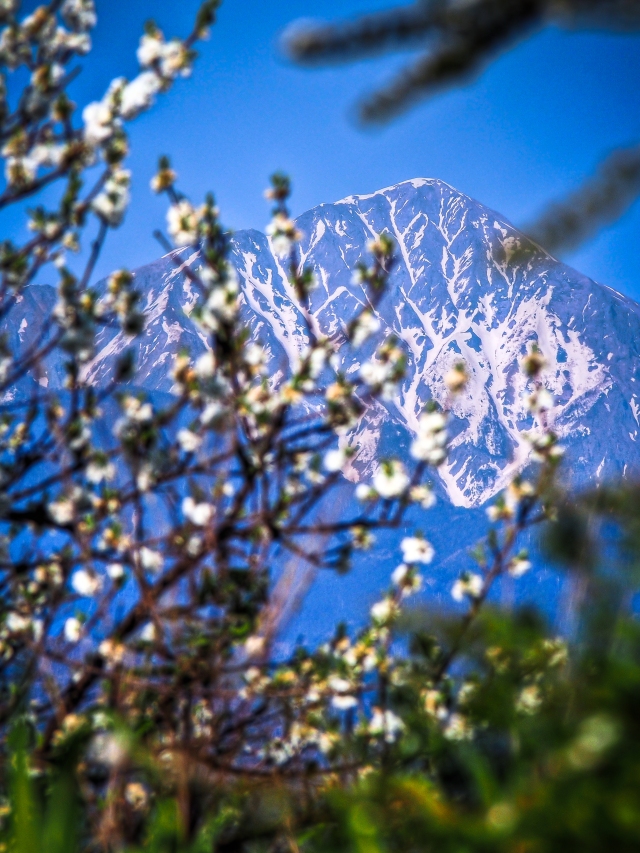 The entire existence of Shimoguri seems to fly in the face of The Law of Gravity itself.  Some fifty households perched on the edge of oblivion high in the Japanese mountains.

I gave the Missus a nudge, “Maybe someday we can make it fifty-one…”