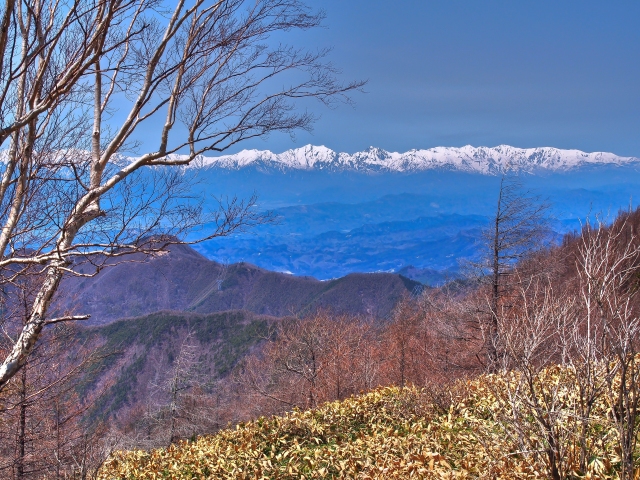 The Old Man turned up on our doorstep.  He’s been making a bit of a habit of it these days; becoming a bit of a jetsetter in his old age.  The Missus won’t have him over for less than a month and we think he enjoys the Land of the Rising Sun – as long as he doesn’t have to take off his shoes too often, has a fork in his pocket and fish and rice are kept to a minimum.  Onsens are fine and booze prices even better.

We rented a car and headed bush – Japan style.  Destination: Nagano Prefecture – far enough away from the sea so there wouldn’t be too much fish to deal with at mealtimes and some dramatic scenery to cast his eye over from the comfort of the car.

The Missus had the wheel and I promised to restrain myself from backseat driving, the recent Awaga ructions still somewhat fresh in our minds.  The Kid scored a week off school; something that seemed quite agreeable to him.

Out of Kyoto, we made Tsumago, our first stop, by lunch time.  It was the last day of the Golden Week holiday and the old post town along the ancient Nakasendo Road – one of the old routes linking Tokyo to Kyoto – was still crawling with sightseers.  I believe most of the Nakasendo is buried beneath tarmac these days, though sections of it, as in Tsumago have been preserved.  The Missus and I contemplated hitting the section of stone pathway running through the hills and linking Tsumago and the nearby town Magome, but let it slide.

The following day, picking the remains of a grasshopper breakfast from our teeth (yep, that’s right: grasshopper – be careful what you wish for if you wish for no fish) we drove over to Magome and hunted down a morning coffee before the tourists hit town. 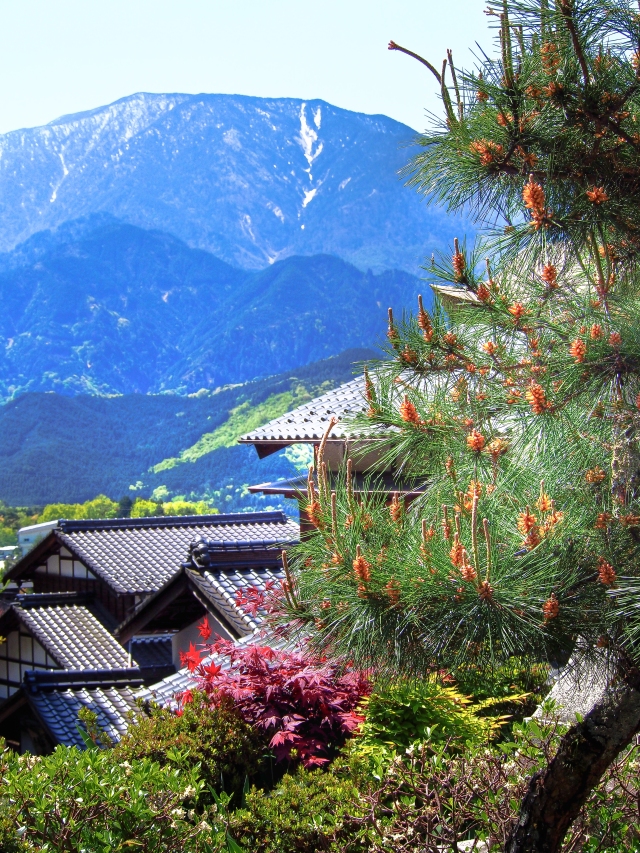 From our coffee supping vantage point we gazed across an expanse of verdant hill country that drew our eyes to the slopes of Ena-san, one of the last Hyakumeizan I’d conquered.

Having given Magome the once over and noticing its main street filling fast with post holiday daytrippers, we skedaddled.  Back to the main route along the Kiso Valley beneath the gaze of the Central Alps.  Out of Kiso-fukushima we veered off the highway to see if we couldn’t find a vantage point with a view up to the mighty Ontake volcano.  Koi-no-bori, the carp shaped windsocks, flown in early May, were flayed by the chilly winds funneling  off the mountains into the narrow valleys and ravines.  At a spot on the road where waters bounded down through the woods in a boulder choked stream and silent monuments stood amongst the trees we looked up to the snow clad heights of Ontake-san, a 3000 metre behemoth, where I had climbed myself to the point of delirium some five years earlier. 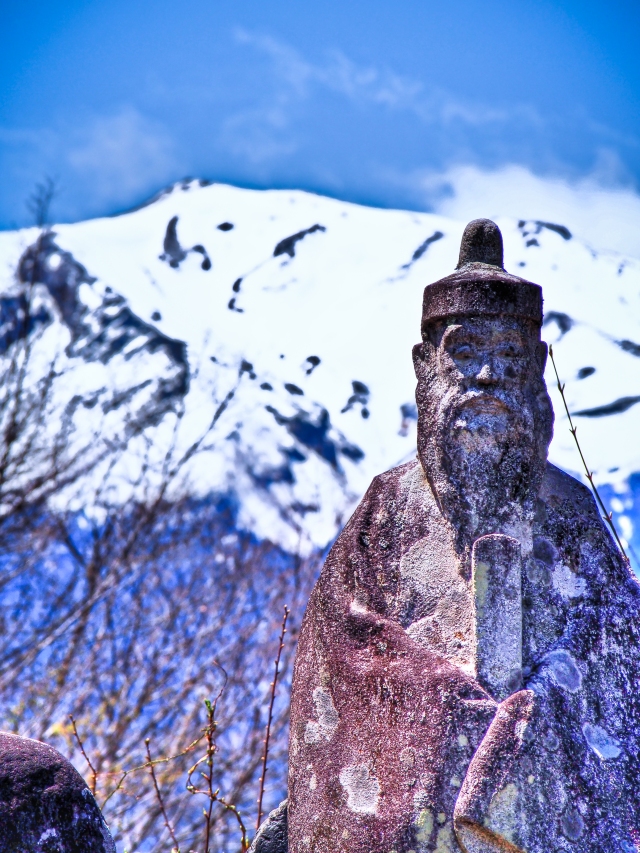 We pulled into Matsumoto not long after four.  Conditions still encouraging us to rug up, we checked into our hotel then headed for an old haunt down the street for food and booze.

The following morning, while inspecting the lovely Matsumoto Castle, I couldn’t keep my eyes from the jagged strip of white stretching the length of the western horizon.  The North Alps shone in the clear, morning light.  It was still cold, colder still, in fact than the day before.  Inside the castle, our feet, shoeless on bare wooden floor, we feared were succumbing to a dose of frostbite. 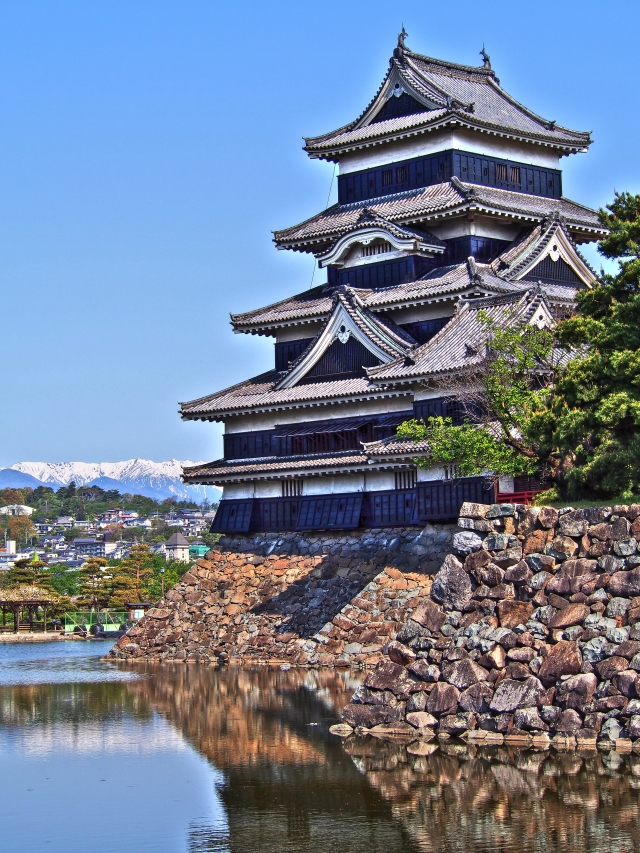 From Matsumoto we swung back to the south in a wide arc out over the Utsukushi-ga-hara highland where the mercury resided stubbornly in the realm of single digits.  The Old Man hunkered down into his ski jacket as he traversed a wind blasted car park smeared across a swathe of abused highland plateau.  This place is a much maligned destination on the Hyakumeizan hit-list nowadays.  Loved to death or just willfully abused Utsukushi-ga-hara is dotted with antennae, left to rot ski resorts, open air museums of strange, luridly hued paraphernalia, cow pasture and ribbons of tarmac.  I was just glad to be out of the car, all the way up the twisty switch-backing road to the top as The Kid had loudly threatened to reacquaint us all with his share of the hotel’s buffet breakfast. 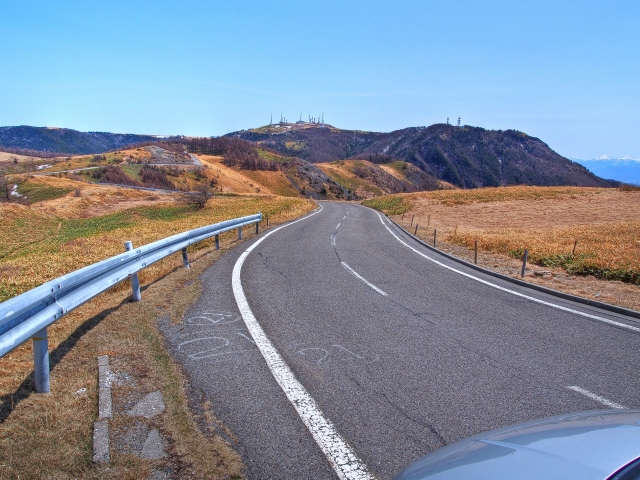 I have a soft spot for the place.  I’d spent a cold autumn evening and night on the far reaches of the mountain in my tent, amidst the pastures and deer runs, watching cloud sweep across its rugged western escarpment  and plunge into the clamouring forests below.  Though Utsukushi’s reputation as a violated piece of real estate preceded it, I witnessed relatively little of its said malignancies on that trip and departed relieved to have been spared the shock.

This time, though cloud and night were absent and all Utsukushi’s blemishes were on full display, the weather conspired to divert her visitors’ attention once more.  Crisp air and clear skies saw to it that we were looking out off the highland in all directions.  To the Northern Alps and a distant Shirouma-dake.  To the mighty Asama-yama, who, if you stared intently,  was seen to be exuding the occasional wisp of her repugnant, throat scalding gas.  To Fuji-san poking her crown over the rugged line of Yatsu-ga-take and there was Tateshina, Kiri-ga-mine, the South Alps and still more peaks I probably should have but couldn’t recognise…was that Naeba-san, Myoko or Hiuchi?  Where exactly did Azumaya lie from here?  Damn, you could see for miles. 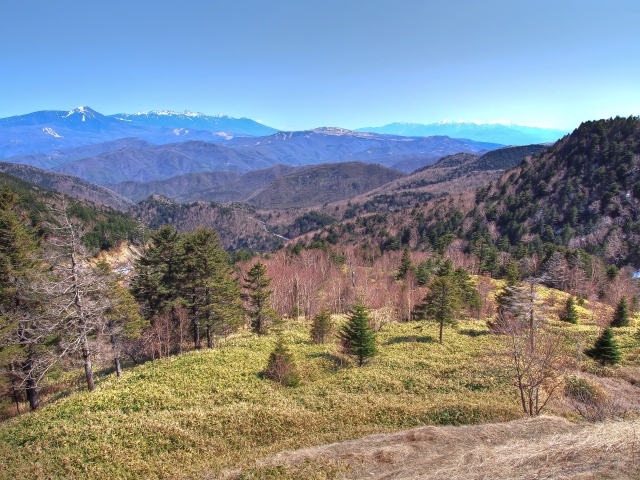 Hot lunch downed in near deserted visitor centre we piled back into the car and pointed its nose southwards.  By nightfall we were to be resting up in the foothills of the South Alps, there wasn’t a minute to spare…