WELCOME TO THE DIRTY THIRTIES

“You motherfucker.  “You mo-ther-fuck-er,” sweat sodden, wracked with exhaustion, I wilted.  Humidity, exertion and the weight of a fully laden pack combined to turn me into a blathering mess at a time more sensible souls would barely be rising and shining.  On hands and knees, I spat obscenities into the pale, crumbling earth.  Beneath furrowed brows, my eyes stung with sweat.  I longed for those grit laden rivers to scour my eyeballs from my head, for what I peered into I had no desire to see.  Four days into my cross Kanto trek, energy reserves at low ebb, nearing the top of a scrappy, crumbling ridgeline rising out of the forests below Hira-ga-take, a ridgeline I’d christened ‘The Nutbuster,’ with my own spit, sweat and tears, I stared down into its final, cruellest joke. 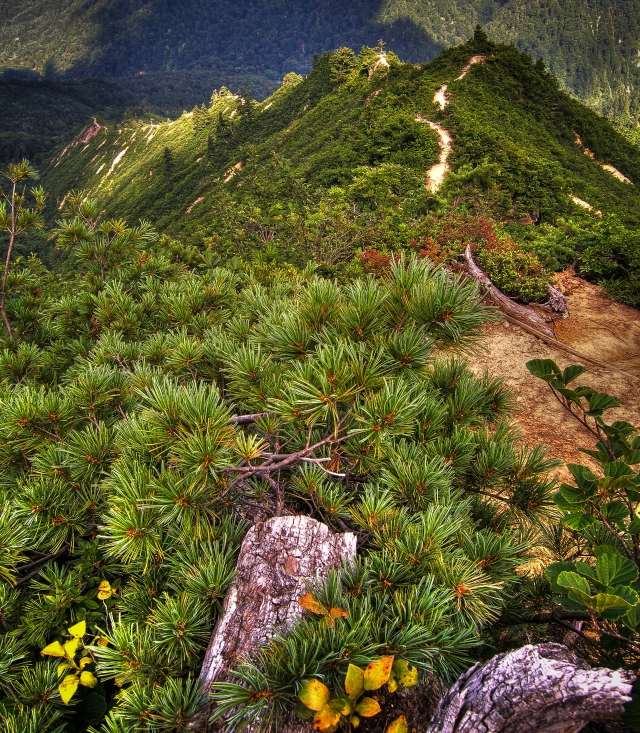 For something near on three hours, beneath a rising sun sporting a particularly merciless sting, I had laboured up an endless, progression of gravelly scrambles interspersed by small clusters of pine.  Every time I made it up and over another little hummock held together by those knots of vegetation – every fucking time – another scramble and clump of greenery stared me fair in the face. The last of these incessant little bumps sits at just over 1400 metres and appears to be the culmination of the climb up to the point where the trail onwards to Hira-ga-take flattens out.  That, as it turned out, was sadly, not the case.  In utter disbelief, I stared into the gaping maw of nothingness.  Instead of strolling over a final, flatter approach to the top of the ridge I was down, grovelling in the dirt trying to comprehend what I saw: a fifty metre drop and a climb up the other side at least three times that.  I couldn’t believe it.  My brain hurt.  Wiping the sweat and grit and dirt from my eyes I re-examined the map and sure enough, upon closer inspection this cruel joke was vaguely discernible.

I had nothing left to give.  Down in the dirt my mind wandered back to that woman on Aizu-koma the day before.  The cunning old hag!  She really had sapped me of my power when she shook my hand!  I’d chewed up Aizu-koma and spat it out.  Less than twenty-four hours later and Hira-ga-take was doing the same to me.

I sucked down some water and plucked up the scraps of resolve whimpering in the nooks of my psyche.  Retreat was inconceivable.  The idea of repeating the ordeal had me up on shaky pins and staggering down into the gap.  Dragging myself up the other side, like a half drowned cat clambering aboard a ship I collapsed onto an old, weathered stump in the shade of an ancient stand of gnarled pines, sucked in the sultry mountain air and prayed for mercy.

As refreshed as I was going to get, I was up and following the trail south along a broader, greener ridge that dropped down on occasion to pass through little stands of trees before veering west into a highland forest and toward the distant, gently profiled peaks of Hira-ga-take.

Sated at a spring bearing some of the sweetest waters I’ve tasted in the hills I made my way through a heavily wooded swamp before walking out into scenery dominated by fields of head high bamboo then strode into a literal wall that knocked me back on my heels.  A barrier of sun drenched, bamboo covered mountain rose before my unblinking eyes, cresting high in the dazzling, cloudless blue overhead. The trail hit it headlong.  An angry, unforgiving vertical scar tore through the swathes of bamboo.  How much brutality was this mountain willing to throw up?  I was being played like a fucking three stringed guitar.  Lulled into believing the worst had passed only to be dealt a metaphorical walloping around the ears as I made the next bend.  A curtain of misery and suffering was drawn around me. I saw nothing of the beauty of the place.  I couldn’t fathom the cruelty, just endure it.  I surrendered myself to the tsunami of bamboo and suffering and walked unflinchingly and unfeelingly into the dusty, hot, steep scar in the dirt.  There the sun seemed more vicious, the ordeal more arduous than it had at any other time.  I dragged myself up, hand over fist, with the aid of the stringy bamboo clinging to the loose, dry earth.

On to level ground yet again, I stumbled, punch drunk, through a scrubby stretch of terrain and soon found myself standing on a weathered old platform lining the edge of some mountain pools.  From there, finally, the top of Hira-ga-take seemed within reach, a wide expanse of rolling mountaintop which could easily have been mistaken for some nondescript hill country had it not been for the hideously, hellish climb that it had taken to get there.  Pack unclipped, it slipped from sagging shoulders and hit the deck not long after I.

Staring somewhere far off into the astoundingly bright sky blue above me, I lay, hurting, aching, chest heaving.  For how long? I don’t know.  Dragonflies flitted, in and out of focus, across the azure milieu.  Blood surged through my limp frame, frantically delivering the oxygen I sucked out of the atmosphere.

Slowly rising to my feet again, as shaky as a drunken clown on white ant riddled stilts, I staggered across to the top of the mountain where, in a scene dominated by shin high bamboo and shallow mountain pools, a wandering hiker, arriving in my wake and snapped off a couple of shots at the spot we guessed the summit marker should have been located.  I’d done it.  Beaten the beast.  I spat in its dirt and cursed it again.  No love was lost between Hira-ga-take and me.

Three options existed as I planned my flight from that mountain to the next: Echigo-koma.  The most direct, but most risky option was to trail blaze north west over a line of peaks, camping once or twice as I went.  On any other equally fair weathered day it would have been an enticing option but not on that day.  I was in no state to trailblaze.  Option Two was to head down the only other trail up Hira-ga-take, follow the winding mountain roads north and then west and maybe get lucky hitching.  It was going to be a long couple of days walk otherwise and with barely another soul on the mountain and none I’d spied coming from that shorter option I was leery of that choice.   Reluctantly, having hauled my pack to the top of the hill, I begrudgingly returned the way I had come.  The torture relived in reverse, I stumbled out onto the road at the trailhead a soul shattered, shell of a man. 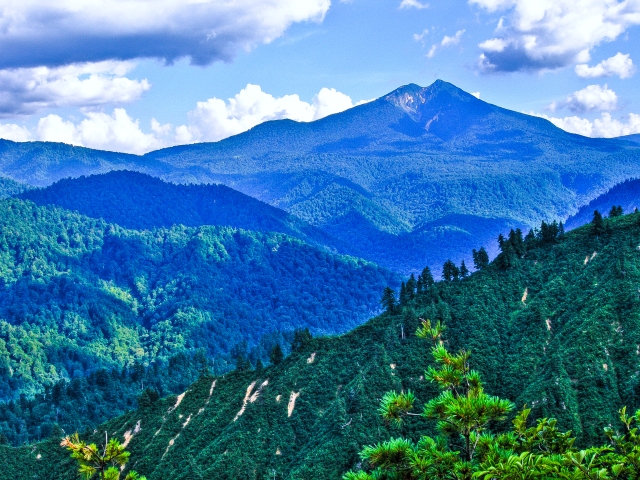 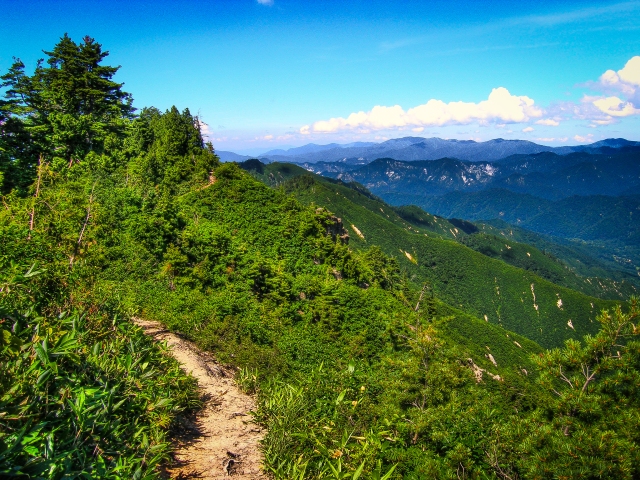 2 thoughts on “WELCOME TO THE DIRTY THIRTIES”