Two hitchhikes on either side of a train ride and I was back in Furenai the day after eating up Meakan-dake.  The light had faded fast on the run into the tiny town and I waved goodbye to the last of my Hokkaido chauffeurs as they looped around on the tarmac behind the post office and headed for home. The lights were on in one of the old rusting train carriages that combined to make up the Furenai Rider House.  Someone was home.

Sliding open the door a skinny little urchin of a man, probably aged somewhere in his sixties looked up at me from his cross legged pose on the floor.

“Kombanwa,” I said as he assembled his gas stove.

“Kombanwa,” he answered and returned his attention to his task.

Seemed like neither of us were up for much conversation.  I dumped my gear and left again, crossed the street and knocked on the door of the taxi office.  I knew what I was doing.  I’d been here before.  An elderly lady with food on her chin came to the door.  I assumed she must have been the old bloodhound eyed taxi driver’s wife.  This time all was fine.  She told me the skinny man in the train was going to Poroshiri-dake too and we could share the ride in the morning.  My hundred dollar taxi ride was instantly halved.

He was an Osaka resident like myself.  Up in Hokkaido seeking a few days refuge from the heat that was sweeping Central Japan.  The hiking season wasn’t half over but Poroshiri was to be his final climb of the year.  Doctors orders.  He’d damaged his shoulder and his doctor was demanding he take a rest to let it heal.  Poroshiri would be his 85th Hyakumeizan.

A middle aged cabbie, steering wheel resting on his gut, turned up to take us into the mountains.  It wasn’t until I wandered the gravel road between the taxi drop point and the Nukabira River Course that I caught up with the old cabbie that had sent me packing out of Furenai some two months earlier.  He was shuttling hikers’ bags in the back of a small white truck along the five kilometre stretch of valley road closed to general traffic.  As he drove toward me I gave him a wave and his eyes sparkled with recognition as the truck puttered slowly past.

Beyond a small dam the gravel road turned to hiking course and soon after that the course plunged into the river.  I sat on a big pale rock at the water’s edge and swapped my hiking boots for a pair of sandals I’d picked up the day before.  The hut was four kilometres upriver and it was a matter of criss-crossing the watercourse for the duration, guided onward by tiny, pink strips of tape tied to trees and small piles of rocks sitting atop boulders and logs.

The hut sat up on the right hand bank in a clearing amidst the trees at the base of the steep climb up to the top of Poroshiri-dake.  People were everywhere.  They cooked lunch on their camp stoves on long benches or sprawled out on some large blue sheets of tarpaulin in front of the dark wooden building.  I climbed the stairs and announced my presence to the Hut Master, apologised for not realising I had to make a reservation and asked if I could be spared some space out of reach of the marauding wildlife.

“Hitori?” he asked looking me up and down from behind a small pair of spectacles.

He asked me for 1500 yen and showed me to a sleeping space below the stairs leading up to the second floor.  I was in.  I was safe.  Relatively, at least.  There was still the mob of old fogies outside to deal with.  I dug around for some lunch and went out to join them, spreadeagling myself on the tarpaulin in the warm sunshine.

Later as the air chilled and the shadows from the towering valley walls swallowed us all down there on the banks of the river I struck up a conversation with a tour leader who spent half the year running off around the world on various larks.  He proudly told me how he’d cycled across the Nullabor Plain in Australia, from Perth to Adelaide and showed me a collection of frostbite photos from his solo adventures in the Alaskan tundra.  I shook my head.  He was madder than me.  I wondered whether one day I could pluck up the courage to do similar such foolhardy things.  A lady came up and gave me a steaming cup of instant noodles and a pair of chopsticks.  “Dozo,” she said and smiled and nodded.

I endured most of the snoring, rolling on hard floor from side to side in a half sleep until what I assumed was still deep in the night the rustle of a plastic bag signified that first light approached.  One solitary plastic bag scrunch.  That’s all that’s necessary to start the bull rush for the door and the top of the mountain.  It’s as if the undead suddenly rose in the night.  Within minutes the place seethed with the to-ing and fro-ing of aged hikers prepping for the day.  I lay there listening to the growing murmur of sleep muddled conversation, the sock muffled drumbeat of a hundred pairs of feet on the floor around me and coming down the squeaky stairs overhead.

When a pale grey light appeared outside the opening and closing door I roused myself, feeling as stiff as the boards I’d slept on, picked the sleep from my eyes and a dried lump of snot from my nose and went through the same old routine: toilet, breakfast, brush teeth, pack up. 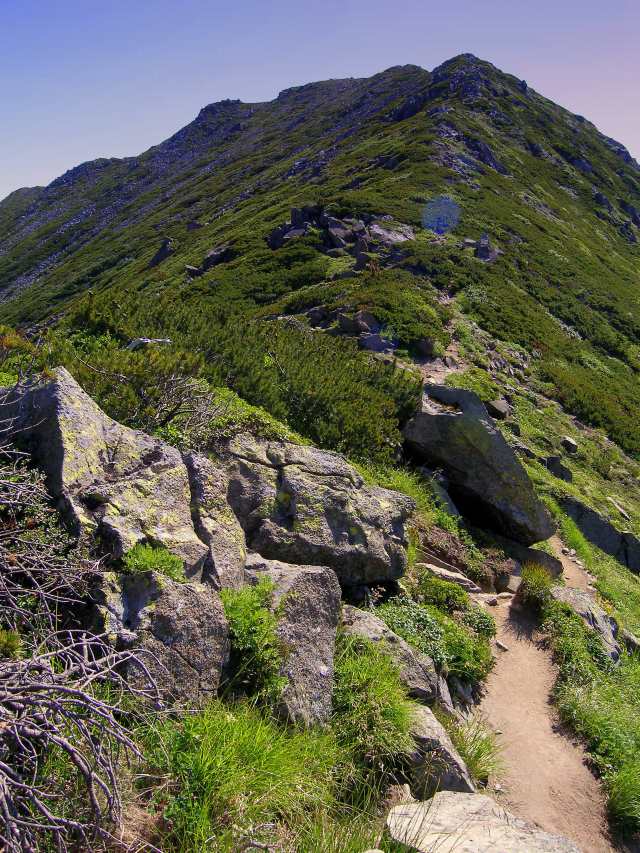 Up through the birch forests, the steep thousand metre climb was a waker-upper in itself.  Clawing my way over some gnarly pine and rocks I scrambled out onto a ridgeline a couple of hours after leaving the hut. The trail circled up to the summit through fields of wildflowers and alpine grassland rounding the top of a cirque where the last of the winter’s snow melted into trickling streams draining out to the north and down to the headwaters of the Nukabira.  There weren’t many people about on top, I’d passed a few climbers but it seemed most of the morning’s stampede must have headed downriver having already summitted the day before. Up on top I propped myself up against a rock and took in the views as I munched on my supply of chocolate almonds.  What a way to farewell Hokkaido: high on a mountain top in the middle of nowhere.  The Hidaka Range stretched away along bounding ridgelines of blue in all directions.  I shut my eyes and listened to the wind and snoozed for twenty or so minutes until other climbers slowly turned up and oohed and ahhed at their efforts and the views.  I rose and shook the life back into my legs, readying them for the knee knocking descent.  The skinny fella arrived and quickly snacked before heading over to the next peak – Tottabetsu-dake.

“Will you join?” he asked.  I declined, preferring to slowly wander back down the way I came and make for the taxi pick up.  “I’ll see you later,” I said and hoped he wouldn’t come a cropper anywhere – he was fifty bucks of the hundred dollar ride back out. 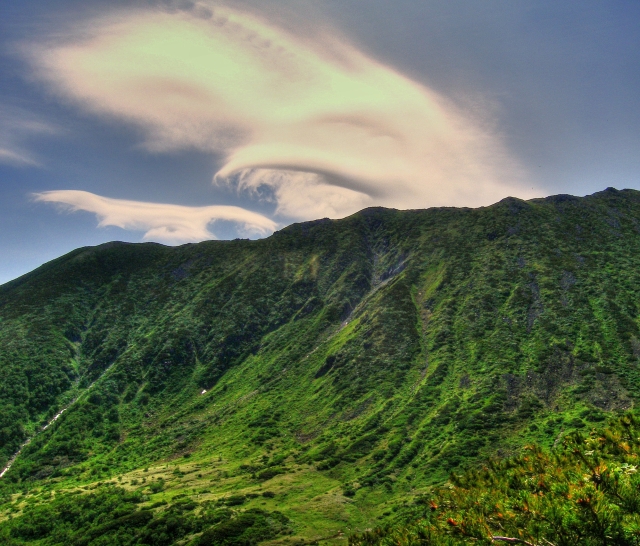 Back in the rusty aquamarine train I showered and downed a well deserved beer with the skinny bloke from Osaka.  The twilight clouded over and night came on.  A woman turned up to collect 500 yen for our lodgings.  I explained we were there two nights but she wasn’t concerned about that.  Crickets chirped outside and insects buzzed around the light on a pole.  The ceiling fans rotated on their circulating brackets and at times a truck would rumble through the town on its way to Asahikawa or the sea.  By morning the rains had returned to Furenai and I was awoken around fourish by a loud dripping at the far end of the carriage.  Soon drips would be raining down every square metre or so.  We sat and watched the incessant downpour through the grimy windows and I wondered how much more rain the old place could take.

I thought about the river and hikers walking out in those conditions.

I thought about how I’d hiked through Hokkaido and managed to avoid the bears.

“We are lucky,” the skinny chap said as if he was reading my thoughts.

“Hai, so we are,” I said as I watched the water fall from the sky in straight, grey lines.