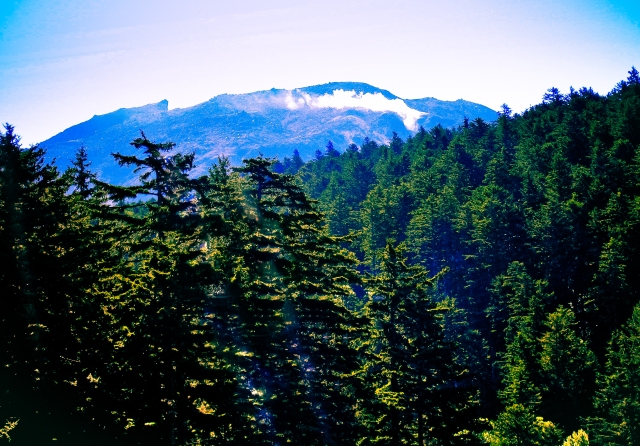 There was no room at the Nonaka Onsen Youth Hostel.  The white haired fella sitting at the front desk in his underwear, light blue towel around his neck, gruffly informed me.  Before attempting to decipher the bus timetable I’d received, I enquired, in Japanese, about afternoon buses, at least ones heading back as far as the more touristy Akan-kohan.  He just sat there, as still as a bloated toad, and muttered in Japanese that he didn’t understand, his eyes burning holes in my forehead. Or maybe he didn’t know the schedule I reasoned.  I produced the timetable and he stopped me with another, more pronounced, “Wakarimasen,”  “I don’t understand,” before I had a chance to say anything.

Attempting to rephrase my miserable Japanese, all I received in response was a third, even more forceful, “Wa-ka-ri-ma-sen.”

“Hai, okay,” I conceded defeat, concluding that I was dealing with, in the purest sense of the word, a natural born arse.  What a wanker.  Believe it or not, cockheads do exist in Japan. Feel free to drop by the joint and see for yourself.  Consigning him to the ‘Go to Hell You Old Bastard’ basket, I wandered across to the somewhat more expensive looking Nonaka Onsen Hotel and was turned away in an exceedingly more polite manner by the lady who appeared from somewhere out the back, mop and bucket in hand.  She suggested I try another place up the road a little bit. 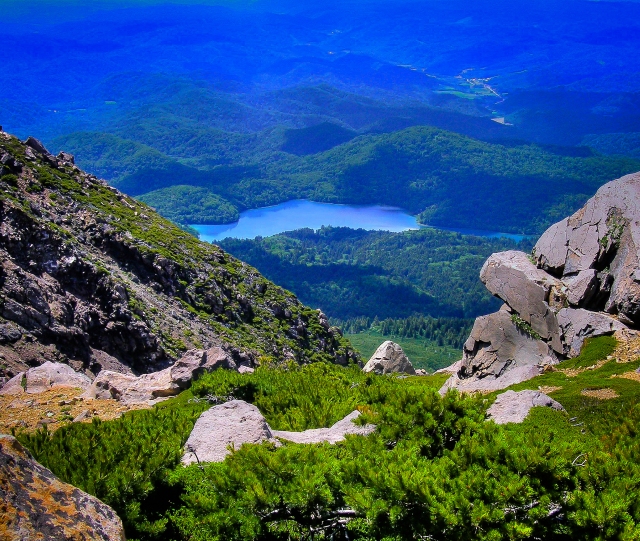 It was a case of third time lucky.  In a little white, pointy roofed building, I was squeezed into something resembling a basement cellar.  I was in no mood to camp, so deemed the cramped quarters satisfactory.  Soon after settling in, sun still high in the sky, I was headed up the past the eruption warning signs at the trailhead of Meakan-dake.  The mountain is a living, fire breathing volcano and they make sure they remind you of the fact at the trailhead.  I couldn’t help hoping for an eruption that would send a nice city block sized piece of steaming mountain down on top of old mate and his Youth Hostel – a day or two after I was out of the area of course.  What a prick that old fella was, his snarling visage played on my mind as I headed up through the red pine cloaking Meakan’s lower slopes.  The old coot could rot in hell for all I cared.  What a right royal bastard.

The climb was a piece of piss and on good legs, under blue sky, the spectacular afternoon out on the mountain soon had me forgetting about the wanker of the century down below in the – oh, where was it again? – oh yeah, that’s right, the NONAKA ONSEN YOUTH HOSTEL.  Amidst the emerald forests out to my right the famous Onetto Lake shone like an azure jewel and I sat on a rock and took in the views and chatting to a French family who caught me up.

Further up, the surrounds took on the appearance of a barren moonscape.  Volcanic gases shot out of fissures inside the crater, imitating the sound of jet engines such was the pressure exerted upon them from deep inside their subterranean chambers.  I stepped as close as I dared to the edge of the crater rim and peered inside.  Down on the muddy basin floor, through the swirling gases, a golden pool shimmered in the light.  The views opened up further, and an otherworldly expanse of volcanic land spread out down to the east towards Akan-kohan.  Behind Meakan the sinister, black cinder cone of Akan-fuji rose against the backdrop of blue and beyond this evil black pile of ash the peaks of Daisetsu-san lined the horizon.

On the summit a towel headed chap took my proof photo for me, while another older, fatter bloke in a straw hat walked a dog, heading down towards the expansive ash fields.  The Frenchies poked their heads up over the rim, Mama sucking down gulps of sulphur laced air.  Sitting there on top of Meakan I realised how much I enjoyed getting up close and personal with these live, hissing, gas belching volcanoes and made a mental note that, once finished with the Hyakumeizan, I’d seek out more experiences like the one I’d had that day.

The wind strengthened and blew grit in my eyes as I stared down into a green pool inside the crater.  Wisps of smoke or steam rose out of a fissure over toward Akan-fuji and snapping myself out of my reverie, I shouldered my day pack and slowly made my way down, beneath the black slopes of Akan-fuji, into the red pine forests and out to the shores of the brilliantly blue Onetto Lake.  The climb felt as though it was almost over before it began.  I daydreamed about staying there for a week, swimming in the lake, wandering the trails between the volcanoes, bathing in the onsens at the end of the day and sucking on cans of Sapporo Draft.

“But not this time,” I had to keep moving.  That evening I soaked in the pale, milky blue waters of my lodging’s rotemburo and watched the sky darken overhead.  My days in Hokkaido were coming to an end all too quickly.  Only Poroshiri remained.  It was finally time to return to Furenai.